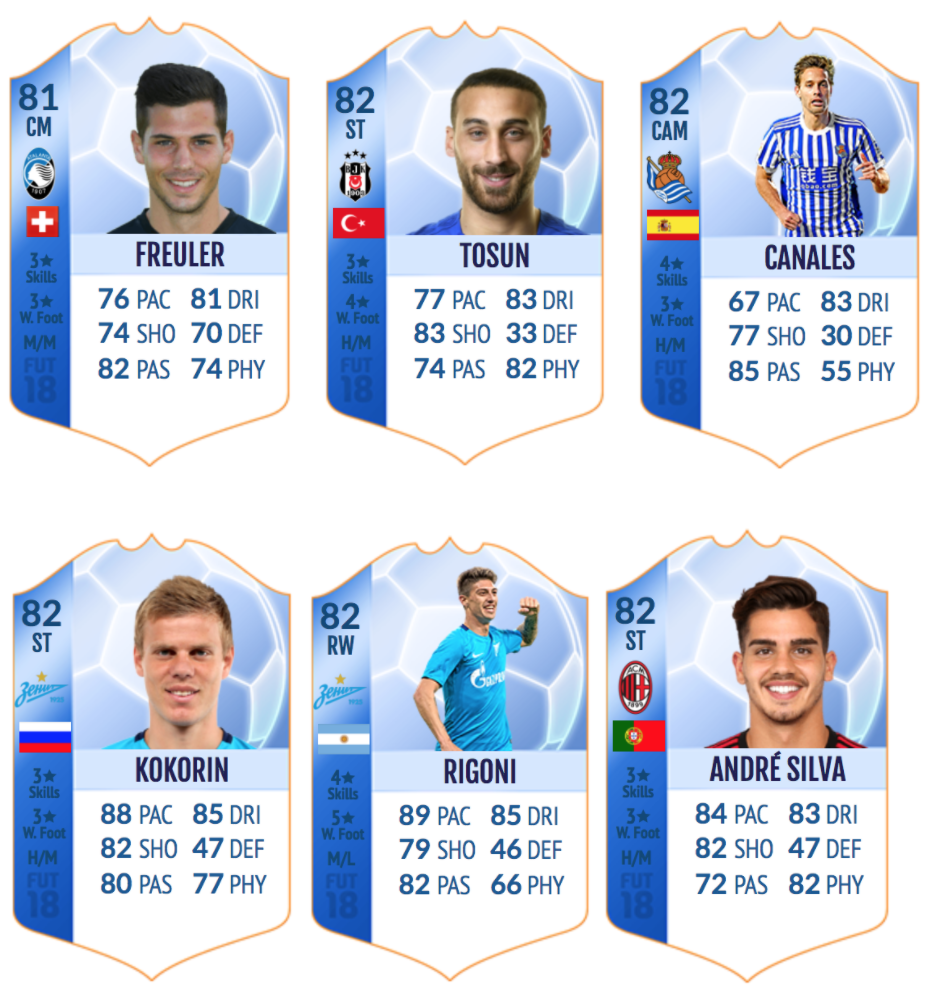 In a few weeks, EA will release the Team of the Knockout Stage team. Last year, these cards were released on April 21st. This year, the World Cup has pushed tournaments (Champions League, Europa League, etc.) up a week, so I expect TOTKS to be released on Friday, April 13th. Here is how you can best prepare for this event.

Reasoning: Like most events, EA likes to release SBCs associated with new cards. In February, we saw Tradable and Untradeable Summer/Winter OTW challenges for Winter OTW. These caused the cheapest OTW players to shoot up in price. 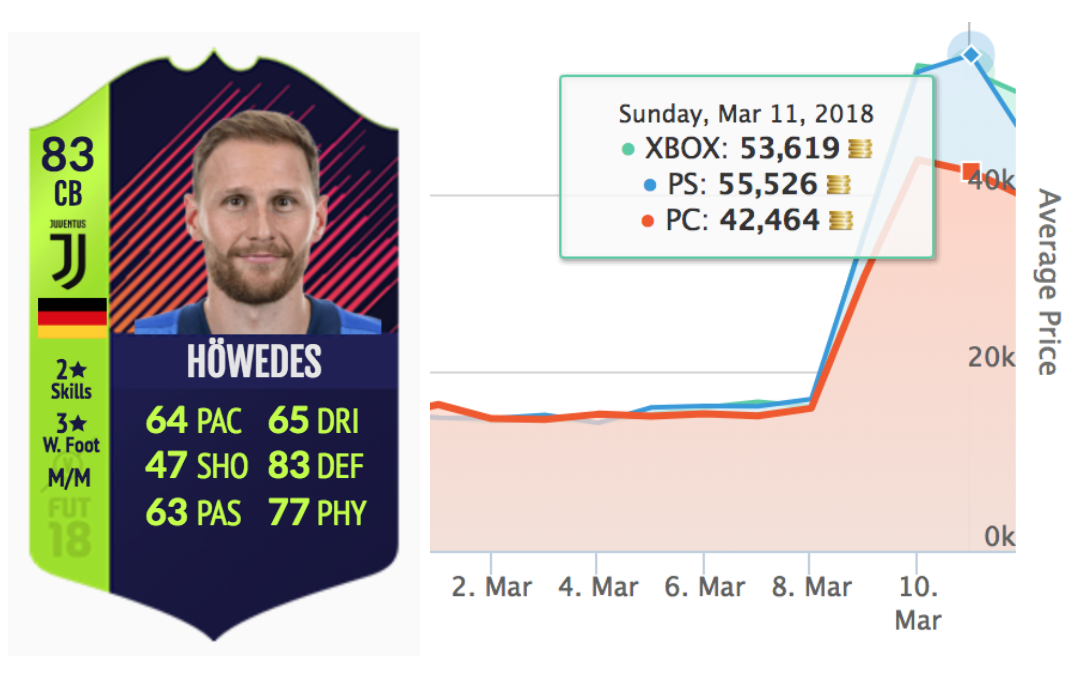 Last year, EA had SBCs for the upcoming TOTKS event that required a Team of the Tournament player (knockout stage or group stage) as well. Kongolo was the cheapest TOTT player at the time, and he went from 13k to 30k (Xbox).

Listed below are the current cheapest TOTGS players (follow this link for the live prices).

I expect these players steadily rise over the next few weeks in anticipation of the event, so the earlier you buy them the better.

Sell Option A: Sell in the hype a day before the event on April 12th. This will get you guaranteed, safe profit. I expect them to rise to around 25-30k for this.

Sell Option B: Sell after the TOTKS and SBC release on April 13th (offload sometime that weekend) in hopes EA has attractive challenges comparable to that of OTW and PTG. If they hit, TOTGS cards could rise to 40k or more.

Where I’m from it’s sunday afternoon and seeing as FUT BIRTHDAY is coming to an end my question is do you see the market coming down tomorrow or this week in preparation for TOTS and this promo TOTKS?

I think the market will continue to decline leading up to TOTS. Were there any specific players you were curious about?

Not really, i just don’t want to lose many coins on my current team.

The next big dip in the market will be on April 13th for TOTKS. If you have any packable cards, I’d make sure to sell before then.

Should we wait for these upgrade promos to end if we want to liquidate our club or do asap? (high rated players that are frequently used like KDB and DDG)
Planning on selling anything of value, invest and buy end squad when market hits rock bottom for tots. Good idea? @futchief

Sure, but i meant 87+, since they dropped massively during these promos. But i guess they will just keep dropping and its best to sell them?!

Most 87+ rose during these promos actually, not sure which players you are talking about.

De Bruyne and Nainggolan dropped 30K each around 13th March. De Gea dropped back around fut bday. Others didn’t.

Oh I was talking about the cheapest 87s, 88s, and 89s on the market and how they rose. Yes, I posted when the leaks came out that those players were going to take a bit hit. The next time they will take another hit is for the TOTKS promotion on April 13th.

Is it safe to sell the players on the day of the release of this TOTKS?

Yes, that is safe as well. Selling option A can be done anytime on April 12th or 13th before the TOTKS is released.

Thanks Chief. Sold everyone valuable and are sitting on 1,3M rn. Should I invest all of that into these totgs cards?
Or split investments and buy some 82IF Discards or even 83,84‘s if they drop after the promo before they rise again?

I’d split between TOTGS cards and the 82 rated informs from this week.

Can you kindly explain to me what do 82 inform discards mean, please?

Inform cards with 82 rating that are being sold close to the discard/quick sell price of around 10k, minimizing the potential losses

Correct, I made this post about the success of 82 rated informs from TOTW 24 if you want to check that out as well for more information/evidence.

Based on the price predictions I have given in the sell options, yes, there’s still profit to be made there.

Hey Chief, what about invest on IF Verratti? Do you think his price can rise after the SIF panic sell?
Thanks!

IF Verratti is valuable because he is the cheapest 88 rated inform in the game, making him useful for SBCs. However, SBCs are becoming less and less desirable by the day as we approach TOTS – Team of the Season cards are cheaper, tradeable, and often times better than Prime Icons and other League SBC cards. I don’t see him going up in price.

Hi Cheif, great guide for once again. Is it safe to invest all my coins (around 1m) on TOTGS players even if they are around 22k right now?

I wouldn’t advise mass buying 1 millions coins worth all at once. I’d say it’s a better idea to set a price of 20 or 21k and try to grab some on a deal rather than simply buying the lot.

While doing this, it might not be a bad idea to buy some TOTW 27 Informs as well.

Hey chief i was wondering aboit investing with 82 rated players.

82 rated informs? 82 rated TOTGS players? Who are we talking about?

Sorry i was talking about normal 82 rated rare gold players as they were needed for the sbc last year.

Players like Adrien Silva and Danilo Pereira (82 rated players) shot up in price for the event last year. I’d expect more of the same this year.

Do you think the new player swap promotion may mean that there will be no totks cards?

No, this is just an additional event EA added in this year. The community would go in an uproar if we didn’t get any TOTKS cards – not to mention they are a huge moneymaker for EA.

Ok thanks i was getting worried about my investments

If you are worried, just sell in the hype and you will be guaranteed profit.

Hmmmm Chief Fut Champions in manchester (special SBCs) has delayed TOTKS ? What do you think?
When TOTKS will drop? next week or never…. ? ;/

This can’t be true. I invested everything in this and played with a shitty team cause everyone was sooo sure it will drop today.

My guess is next week Friday. It sucks, I know. I’m holding onto my 500+ discard informs until next week.

Is there going to be any totks cards!?!?!

But what about the new motm cards?

Are they there instead of totks cards?

We won’t see TOTKS today. We might see TOTKS next Friday, April 20th. The eMOTM cards will be removed from packs then.

Chief do you still think there will still be totks cards on the 20th after the tots anouncement?

There is still a change (although a small one) that we have TOTKS on the 20th. Fortunately, we saw informs rise as a result of the Sessegnon POTY from today. I’ve been starting to sell off my informs as many rose 50%+.

But i think it will come this friday as if you look at when they dropped totgs it was after totw12 (exaxt same as this year) and totks was released after totw 31 which is due to be this friday. In addition the promo for this will end at exactly the right time for tots. Do you agree?

There’s definitely a chance. If it doesn’t come on Friday, April 20th I don’t think we will see it at all, which would surprise me.

In addition people would have been less motivated to open packs as they would not be watching streamers such as matthdgamer open packs and build up hype.

Trust me, I’ve thought that through as well. EA gave out free packs for watching that event. I’m sure there is market psychology behind them giving out free packs in the sense that people are more likely to buy packs for upcoming TOTKS and TOTS events if they get a ‘taste’ of what a pack might offer. I definitely can see where you are coming from. I just think that inform prices will decrease in price as people complete this Sessegnon SBC and demand goes down. That’s why I’m taking my profits now and assessing the market on Thursday to see if I want to buy back cheap 81/82 informs or TOTGS cards.

Yea im holding onto my totgs catds as they are resting at 14/15k and they could possibly go up. I was also talking to an ea advisor and she hinted totks may come.

Damn bro it really sucks EA didn’t give us TOTKS

Yeah, I was pretty disappointed as well.