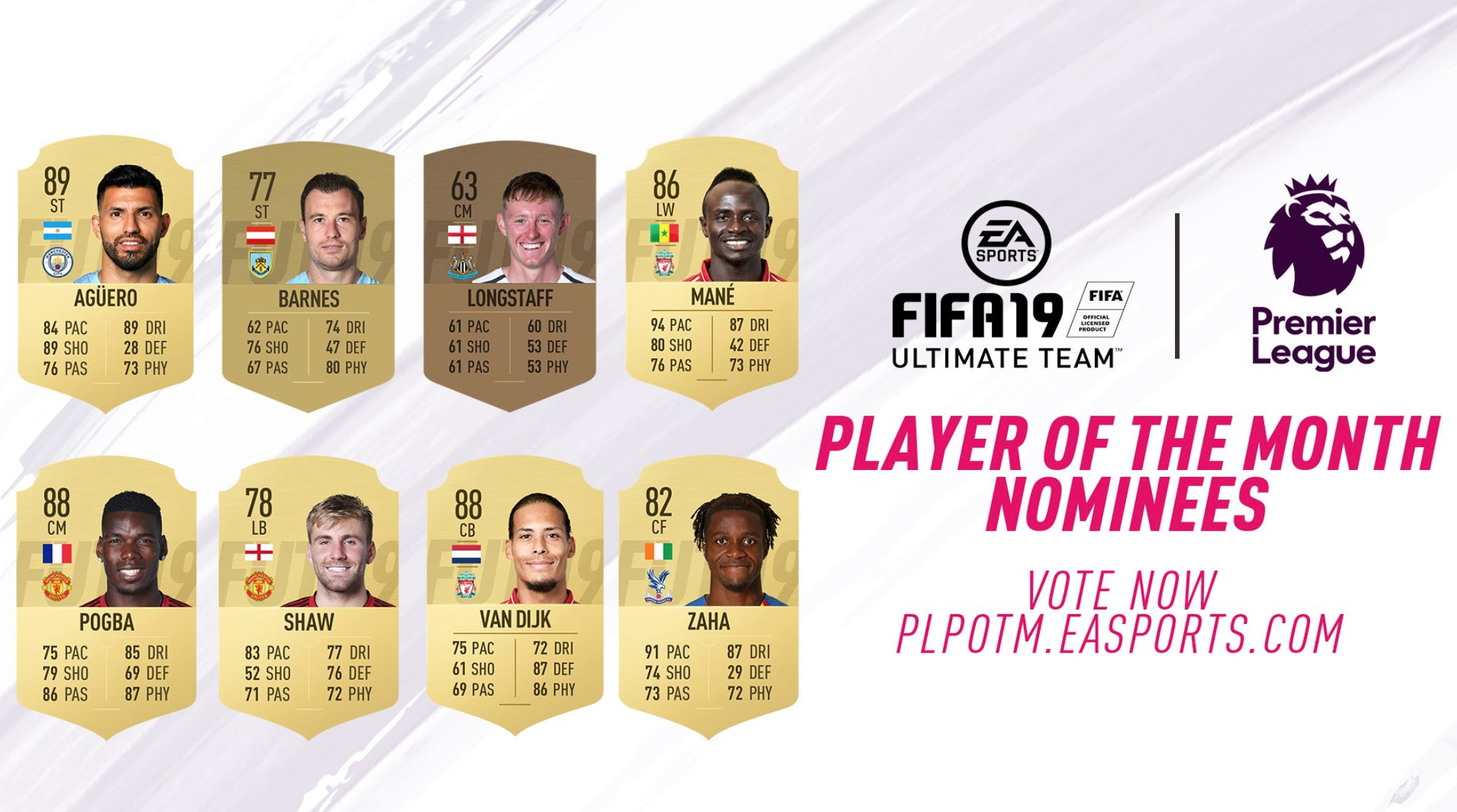 While it is almost certain that Agüero will get the honor, regardless of who wins, the SBCs will likely require some high rated Premier League squad.

Time and time again, there are common connections people turn to when completing these challenges in the cheapest way possible: Arsenal players.

Arsenal has several players that are some of the cheapest for their respective ratings (Lacazette, Mkhitaryan, Sokratis, Özil, etc.).

I expect next Friday’s POTM requirements to be no exception.

Target BUY: Less than 2,500 coins (there should be ample opportunity to get him at this price throughout the weekend given the current FUT Player Days promotion).

How do you feel about some high rated Manchester City players as there will most likely be an sbc which requires such player. I was thinking of Kompany at about 10.5k

He is pretty good.

Following this logic, would Ederson also be a decent look ?

What impact could we expect to see on the market if Longstaff wins?

Hey…it could happen lol. Or I could just be a hopeful Newcastle fan.

As mandi is no longer on top buys, does that means that your recomendation is to not invest int him anymore?

He is still a good look – just for a lower price than I initially recommended due to the promotions.

Hey chief I bought about 25 mandi’s for just over 14k is this a good investment?

Yes, he is a good buy at that price.

Dear chief,
When you named the others like Lacazette, you mean the upgraded ones?85?right.
Due to less supply.
Tanx for your best effort BTW.

He is also pretty good, yes.

Can we expect the same UEFA Marquee Matchups as two weeks ago? Or does EA usually switch it up a little?

hey, chief! i’ve been trying to discover some POTM Agüero (2 hat tricks, pretty sure it’s going to be him) investments. so, my first though was Otamendi (86, same nation, same team) but then, to kinda check if it was going to be effective, i looked up his prices during the POTM Sterling SBC, and he didn’t rise much. the same with Gundogan, Bernardo Silva and i even checked on David, he also didn’t rise. checked United during the POTM Rashford SBC, Matic skyrocketted while Mata kinda dropped (not much 84s on Man Utd). how do i know which players will rise and which won’t? the requirements were pretty much the same, can’t understeand the reason. thx chief!

Player prices are highly dependent on whether they are in the cheapest FUTBIN solutions.

in the Sterling SBC an 85 team with 4 City players were needed, something like that, that’s why I couldn’t understeand, thanks!

Yo chief, joined the discord buy cant get back in chat, check my re-sub

I added you as a friend on discord.

bought him for 35k

I think there are better places to invest.

What do you think: Are Fut player days part of Fut birthday? Or do you expect another big event next week?

Hi Chief, i Packed Salah today. Should i sell him now or wait to the POTM on friday?

Hey chief, I just packed pogba totw. Reckon I should sell now in the hype or hold it for a couple weeks?

I don’t give much in terms of in-game advice, but perhaps someone else could chime in?

Serge aurier 87 rttf is a damned good card. Replaced Dani alves flashback in my team, and may actually go up a little in price if they progress past Dortmund. Costs around 220k

Thank you for ur comment. I will consider buying him

I would suggest making a couple of changes: Switch Alli with Fernandinho (as he is more defensive and goes very well with Fabinho) Second i would switch Kane with Aguero (he’s a beast). DON’T buy Aubameyang. He feels very slow and sluggish even though his stats are insane (i have his POTM card, which isn’t even on my reserves). Then i would switch Sane with Mane, as he is right footed (personal preference). Salah is a very very strong right wing card.

Thank you for your comments. I actually had mane and typed sane for some reason.

I can say that Auba 88 is brilliant for me and scores screamers from distance and from the box. You might have just try if he fits your style and formation you use. One player will get more use of Auba and another one will prefer Aguero.

Thank you for your comment. I play with the two fast wingers, so i prefer playing with many crosses and headers, volleys. Which striker would be the best for this playing style?

The best would be Ibra, and I mosty play Arna headliners+Auba or Auba alone. He’s beast with volleys, but not the best header in the game, yet can be found near the ball in the box a lot. Yet not the best in the air. Still, Aguero would be worse in that case.

I bought a few otamendis for 18k. That isn’t bad right?

Hi Chief,
I subscribed to the Gold package and I cannot get the CBP extension working. I tried sending you a msg on Discord, but I gor the below message:
Your message could not be delivered because you don’t share a server with the recipient or you disabled direct messages on your shared server, recipient is only accepting direct messages from friends, or you were blocked by the recipient.
Could you pls advise what to do?
Thanks

Join the private discord via the other email you received. Check your junk mail.

If they win, he will go up.

My favorite players are those in my ‘Top Buys’.

As of December 6th (no particular order)