Now EA put their SBC’s back I’m rereleasing this review. This time not a full on review though, but a quicker walkthrough about the highs and lows from these two SBC players. I’ve decided not to give them a full on review, because they’re not available for that much longer. Also given the fact that I am working on several other reviews. I hope I can help you decide wether or not to complete either of these sbc’s.

When Bernardo came out I wasn’t that excited. In general I don’t get on well with cards that have a 3* WF. So I wasn’t planning on completing him, but after the flood of positive comments he got I decided to let twitter decide. So here we are, Bernardo Silva Moments card is now part of my club.

Unlike Bernardo, Marcelo did get me excited. I already have Futmas Mendy in my club and he has been magnificent, but as a real life Marcelo fan I just had to complete him. He also helps a bit with future squad building due to his strong link with Diego Carlos RTTF. I used his gold before I got Mendy and that felt like it needed a few upgrades. So when I saw the 88 I was sold.

I was a bit hesitant as well though, because 300k+ is not what you’d call cheap. However with all the upgrade sbc’s we’ve had, I had plenty of fodder so I managed to get them both for less than 200k. Which is still not that cheap, but atleast helps me sleep easier at night. Sadly I didn’t pack any TOTY’s or anything else noteworthy. 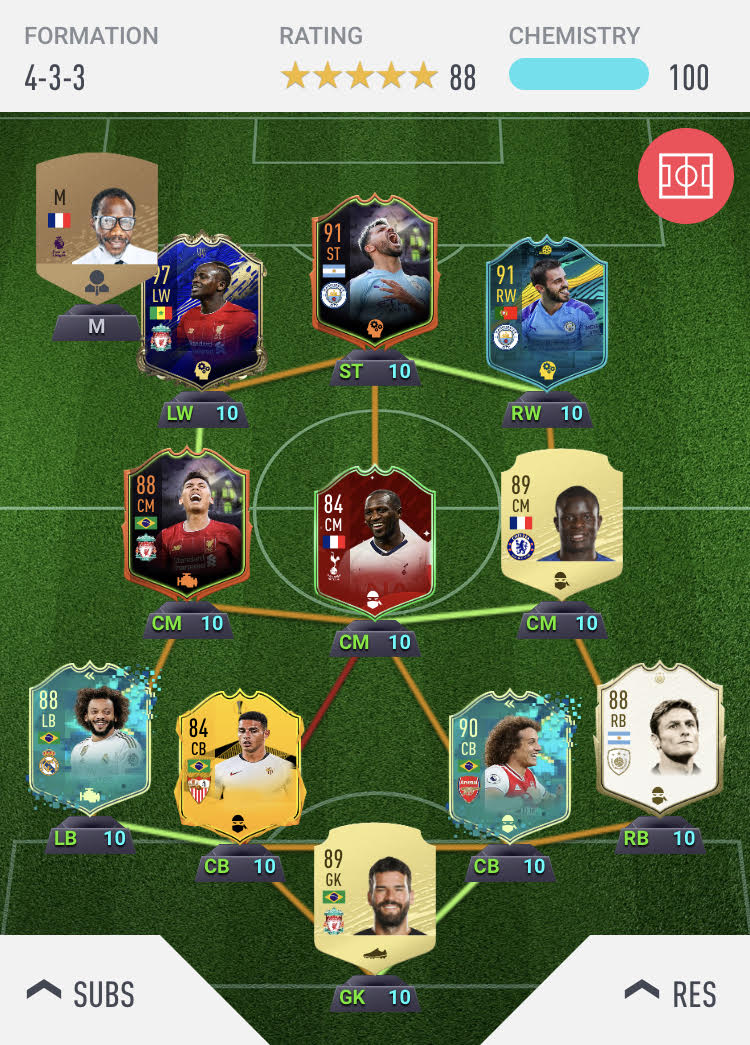 So when I went for my first game this morning I kept a pretty open mind. I wasn’t expecting wonders from Bernardo, but I was looking forward to his “unreal dribbling” as described by so many. He exceded expectations and delivered wonders. My god what is this card silky smooth. He turns on a dime, unless there is a coin smaller than a dime. He delivers pin point passes and is able to turn Scream Pique inside out. Like I said I was hesitant about his 3* WF, but he turns so fast that he is able to use his left foot most of the time.

Where I wasn’t expecting much from Bernardo, I was expecting a lot from Marcelo. Luckily he delivered, because now I won’t have to feel bad about benching Mendy. I am running him with Engine which turns him in a 92 LM and you can feel the class. He excecutes skill moves fluently and his 90 pace feels much faster. He partakes without any issues in the build up and is able to add so much offensively. With the “comeback on defence” instruction he is always there defensively when you need him.

Am I happy I did both these SBC’s? Yes 100%, Bernardo really exceded my expecations by so much and Marcelo is just such fun to use. I am not sure if I would recommend them to everyone though. Especially if you’re on a tighter budget, there are other, tradeable, options out there. If you have coins burning in your pocket however and you’re looking for fun players? You should 100% complete these SBC’s.

I hope this helps with your decisions, let me know if you are going to do them,

chief. a question off topic if you don’t mind. when do you buy icons do you list for 3-6-12 hour or one day? cheers

When is the best time to buy if mane st

Players with limited supply like him can fluctuate if there are a few undercutters that list around the same time. It is just a matter of being there when they do.