futcheck here. I am an avid FIFA player, begrudgingly at times, and have been a Chief subscriber for quite a while now. I will be doing some reviews alongside YAF in the coming days and months, and I hope you all find my observations helpful as you craft your dream team. One of the most recognizable and controversial players of all time will be the subject of today’s review. Diego. Armando. Maradona. Aka The Golden Boy. Aka one of the only players I will consider using with a 3* WF. And he’s worth it, mostly. I played him either at ST or CAM in the 4-2-2-2 formation with a Hawk Chemistry Style in this team in-game setup. 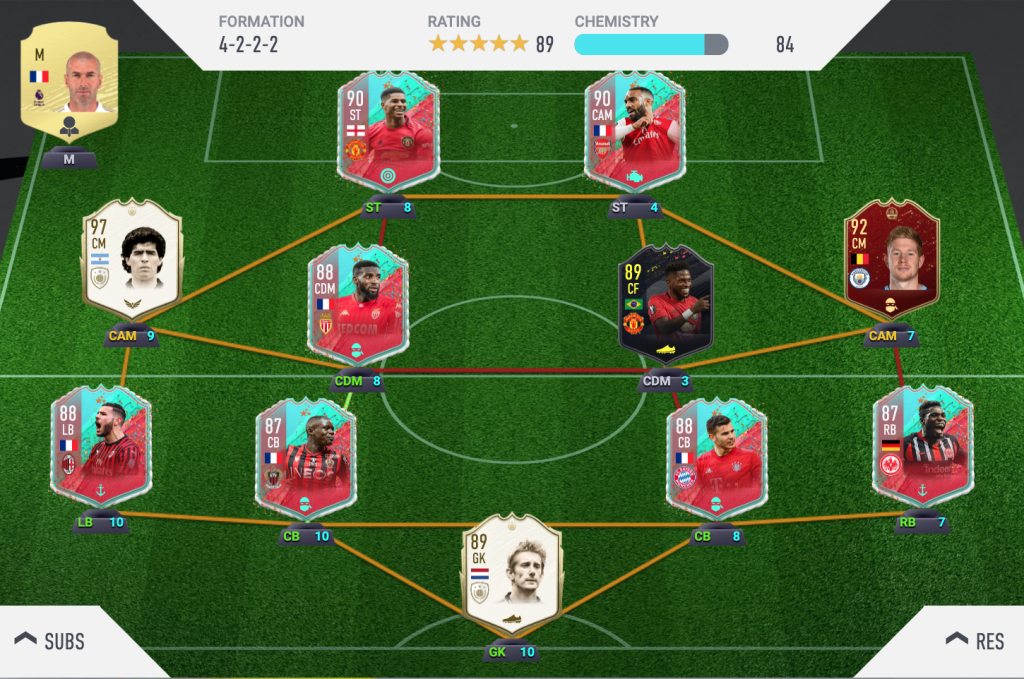 Maradona’s left foot is the best “foot” I have used in this game besides possibly Messi IF cards. He can score goals from well outside the box and is clinical In the area, with 97 finishing that plays like 99.99. The only drawback of course is that pesky 3*. While he can still finish sitters and powerful shots from close with his right, it’s average besides that and will not be finishing anything spectacular. If only there was a FUT Birthday version with 5* WF. Oh well.
Rating: 9.2/10

His passing left nothing at all to be desired. Even with his weaker foot he was always able to place the ball exactly where I wanted with no problems at all. His high Curve statistic (96) is super helpful for bending the ball around people running around with their CDMs like madmen. I prefer to have a drawback somewhere just to show that I was thorough, but I can’t lie so let’s move on!
Rating: 9.6/10

Maradona’s ball control and body shape make his dribbling my favorite part of the card. He can weave his way in and around defenders like it’s Fifa 19 all over again. 5* skills are just the icing on top of this rage quit inducing cake.
Rating: 9.5/10

This card’s base Strength (75) is just strong enough to hold off defenders, but do not expect him to overpower players on a regular basis. His frame also helps here and if you choose to boost his strength anywhere he is more than solid in that respect. His stamina is not an issue unless you ask him to come back on defense in his instructions.
Rating: 7.5/10

The only real drawback of this card is the 3* WF. I would say that him not being a tank on the ball is a drawback, but that isn’t really what you are expecting when you buy Maradona. All of the things you would want him to be able to do he does exceedingly well.

Truly one of the most fun cards I have used all year. Hopefully there are more positive ones to come as well. Thanks for reading and share your thoughts in the comments below!

hi chief, if joe gomez recieves a tots tonight, what would you say are the chances of a player such as in form roberston going up as he acts as a perfect link for gomez

I think there are too many PL options for links to Gomez to rise.