EA announced OTW Team 1 today. Golds of these cards will be out of packs from Friday, October 1st to Friday, October 8th. The following are the golds I’m most interested in:

I probably wouldn’t pay more than 1.5k for him considering he was less than 1k a couple days ago.

Not really interested in him – I think he will continue to go down as the weekend goes on and people open their packs.

Lukaku Will be on OTW team 2, should Invest on his gold card now?

Think it’s a little early to invest in OTW 2 golds. I wouldn’t be looking to grab them quite yet. Also, there is a chance he could be in the mini-release on October 10th, and that would not be good for his case. Would look to other things for now.

Malen should rise too right?

He might. It is very difficult to say which players will rise when going OOP, they are inconsistent at best.

trying hard to speak it into existence, do you? he is 1300 right now. nice invest 🙂

He will rise later in the week on Xbox he is currently standing at 2.3

Thoughts on Martial? His price’s dropped to 10k and I have 4 Martial 🙁 Should I wait for the first WL or sell him at once?

He is pretty low rated, so will be packed a lot. Personally I’d sell and move on. There will be other places to invest in the coming days, like TOTW 3 golds and TOTW 2 players.

What profit do you think would be best to sell for Upamecano?

3-5k would be solid. We are experiencing a market dip right now, but I expect it to bounce back after today into early next week.

Chief how much profit do you think for upamecano ?

3-5k would be good. I’m expecting a market rebound tomorrow into early next week.

I wish I had used my brain. Knew their would be a market dip when all of these packs were released for OTW. Bought a bunch of Grealish between 5k and 6k. Now grabbing him for closer to 4k.

Nice! Usually selling ASAP is the best strategy when it comes to new promo players. He might go up a bit leading into their match on Sunday, but will likely dip as he is packed more next week.

Thanks, Chief. Worried that Grealish won’t rebound with how low he is dropping? He can’t be packed so I’m surprised I can snipe him for under 4k

Not too worried – I think he will bounce back a bit tomorrow and into next week.

Last edited 1 year ago by AshBash
0

Lets hope grealish bounce back bought like 65 cards of him 🙁

When do you expect the card to peak as of next week in the short term?

Bounced back a bit today. 1-2k profit would be good for him.

Nice one, I will do this. Just need to shift a few lol 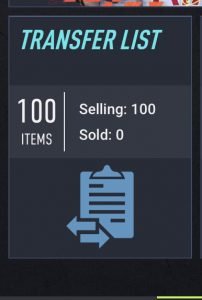 Hi chief should we look too sell grealish? Or do you think he can still rise? Thanks

I still think he will rise while OOP for the rest of the week. Just would hold tight on that one.

what is target sell price for Grealish ?

Considering he hasn’t moved much so far I wouldn’t expect too much from him. Making a couple hundred coins on him would be nice.

Do you expect Hakimi to rise much more between now and end of week? Currently hovering around £140k. Cheers!