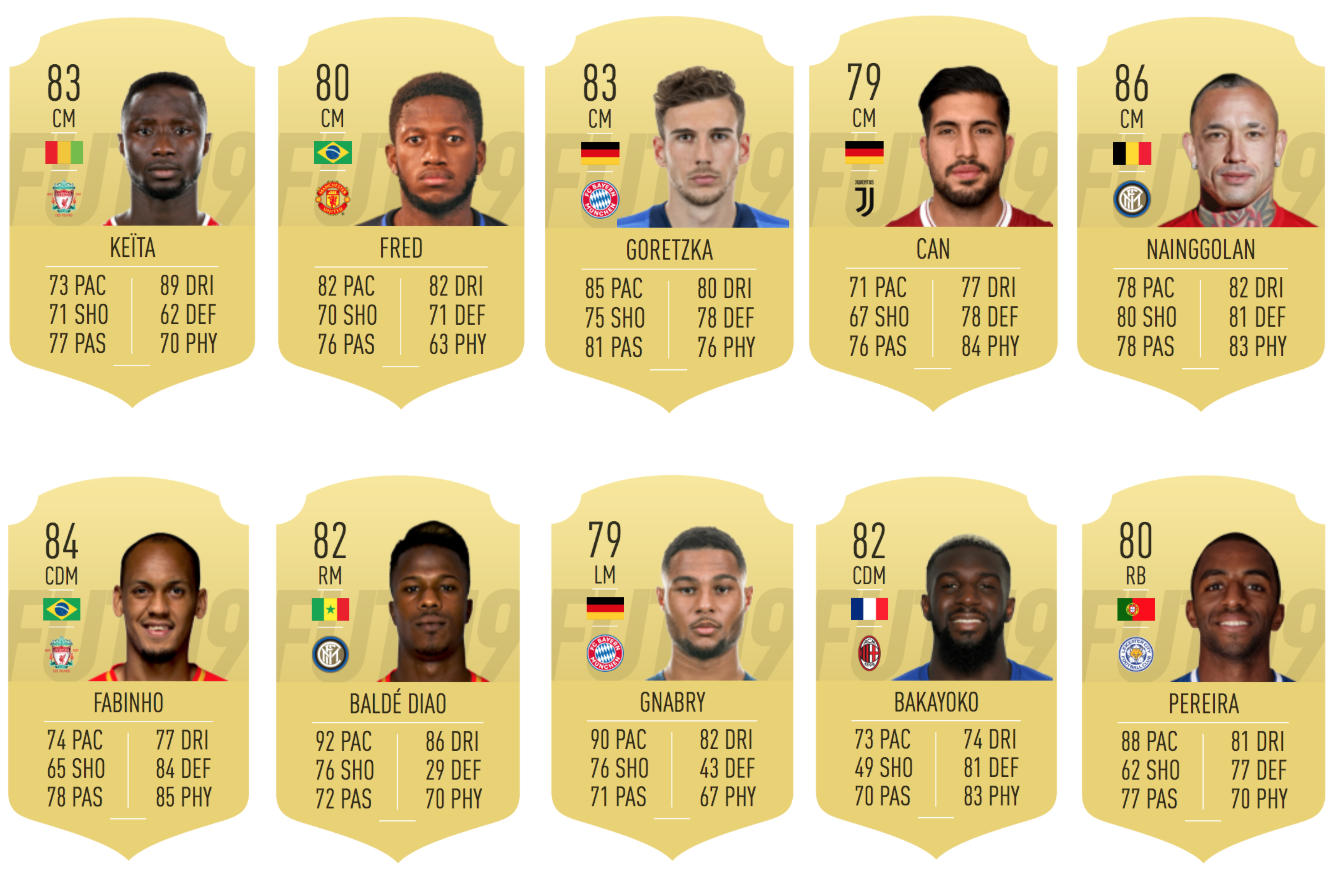 As I have mentioned repeatedly, OTW gold cards are the BEST early investment option for FIFA 19 (check out this article to see how much these cards increased in FIFA 18). Here are my top 10 favorite players to get your hands on before the Ones to Watch squad is released on September 28th.

The Guinean midfielder has been a consistent starter for Liverpool this season. In past installments of FIFA, Keita’s versatility made him a widely used player in Ultimate Team. I expect nothing different in FUT 19.

In FIFA 17, Pogba was chosen as Manchester United’s One to Watch player. In FIFA 18, it was Lukaku. It’s hard to imagine a situation where United doesn’t have a OTW player. For that reason, I expect Fred to get chosen for the Summer Ones to Watch squad in FIFA 19.

Like Keita, Fred is a well-balanced player. His Brazilian nationality makes him useful for hybrids. Investing in him could mean big money.

One of the best OTW gold investments from FIFA 18 was Tolisso (see his price graph here). His price increased 124.2% over the 10 day period from September 29th to October 9th.

Goretzka’s situation is eerily similar – a Bayern transfer that plays in the midfield from a good nation with well-balanced stats. He is a safe bet to say the least.

The German transfer looks decent statistically, but one of the biggest reasons Emre Can will be a good investment comes courtesy of one man: Cristiano Ronaldo. I expect many players in FIFA 19 to use Emre Can for the green link to Ronaldo and because of his usability in German hybrid squads.

Additionally, this Juventus midfielder could be quite cheap during the web app period. Historically, the less expensive players have better return on investments. If you are willing to go all-in on a player, Can could be a good bet.

Year in and year out, Nainggolan is a great midfielder to use in Ultimate Team. I anticipate him to be the most expensive out of any of these 10 players early on. Nonetheless, he should still see a substantial rise over the period from September 28th to October 8th while he is out of packs.

While it is unlikely that both Keita and Fabinho will get OTW cards, I do expect one or the other to be chosen. I will be investing in at least one of each and sending them to my club. I recommend others to do the same.

Pace is key for starter squads, and Balde Diao gives you just that. Not to mention his 4 start weak foot and 4 star skills are highly desirable for an attacker. If he is 2,500 coins or less during the web app period, I rate him as an excellent look.

Pace. Versatile nation. Good league. Gnabry is another player that I could see being very cheap during the web app period. His price could rise similarly to that of Bruma from FIFA 18 if he gets the nod for the OTW squad. The only thing that I could see preventing a drastic price increase is the fact that he has 3 star weak foot.

After receiving a Path to Glory card in FIFA 18, it is uncertain if Bakayoko will receive another “live” item for FIFA 19. However, if he does, I expect his price to shoot up over the 10 days he is out of packs. He is well-known in the FIFA community, and his French nationality makes him useful for hybrid teams.

Cheap and pacey Premier League full backs are often hard to come by at the beginning of the year. If the Portuguese right back falls below 5k, he will be a great look for doubling, or even perhaps tripling, your investment.