Preparing for Team of the Year 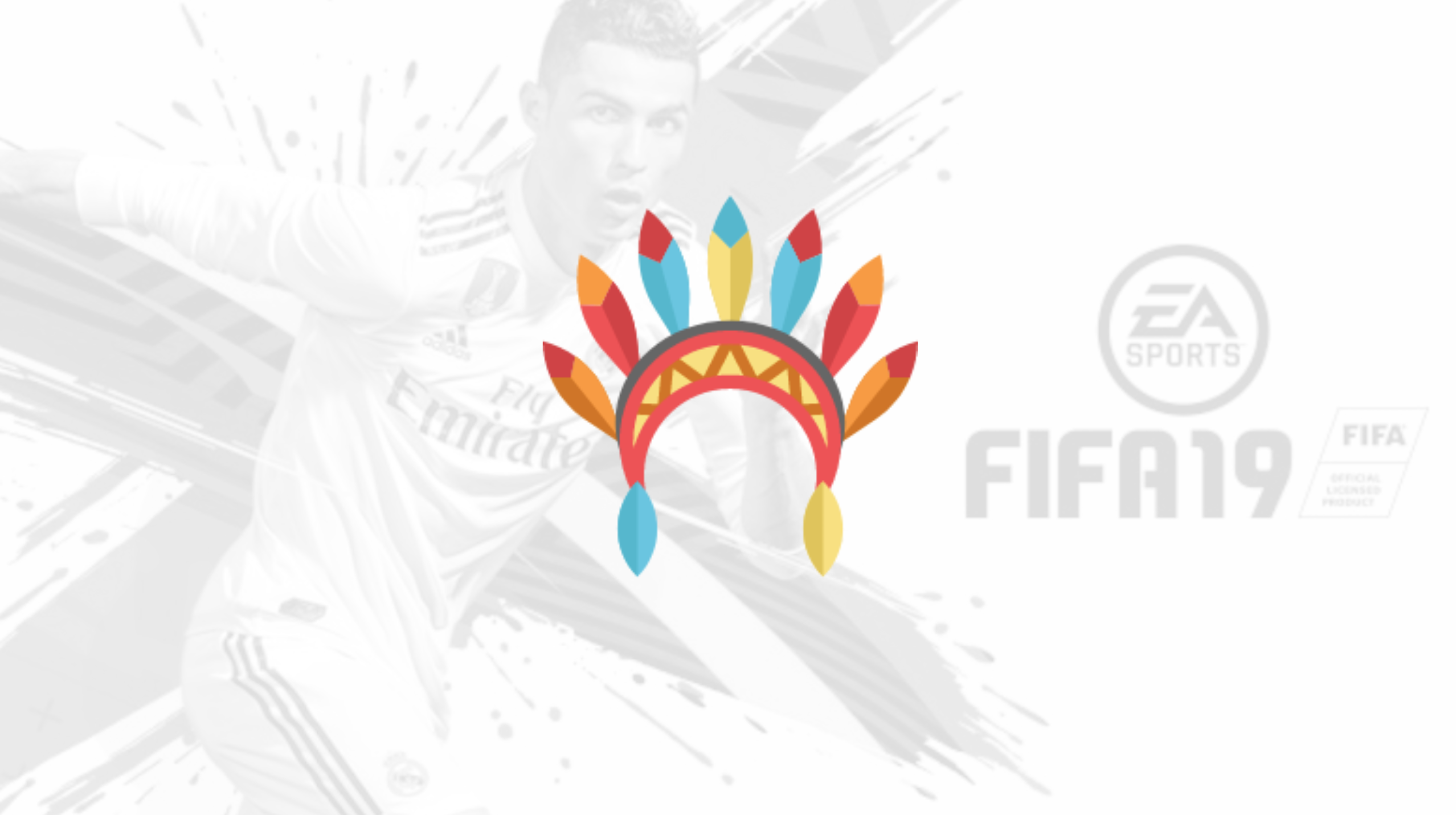 Yesterday, EA announced the Team of the Year nominees. Here is what we can expect over the course of the next couple weeks during the promotion.

Before Team of the Year

Here are the release dates from last year’s TOTY: 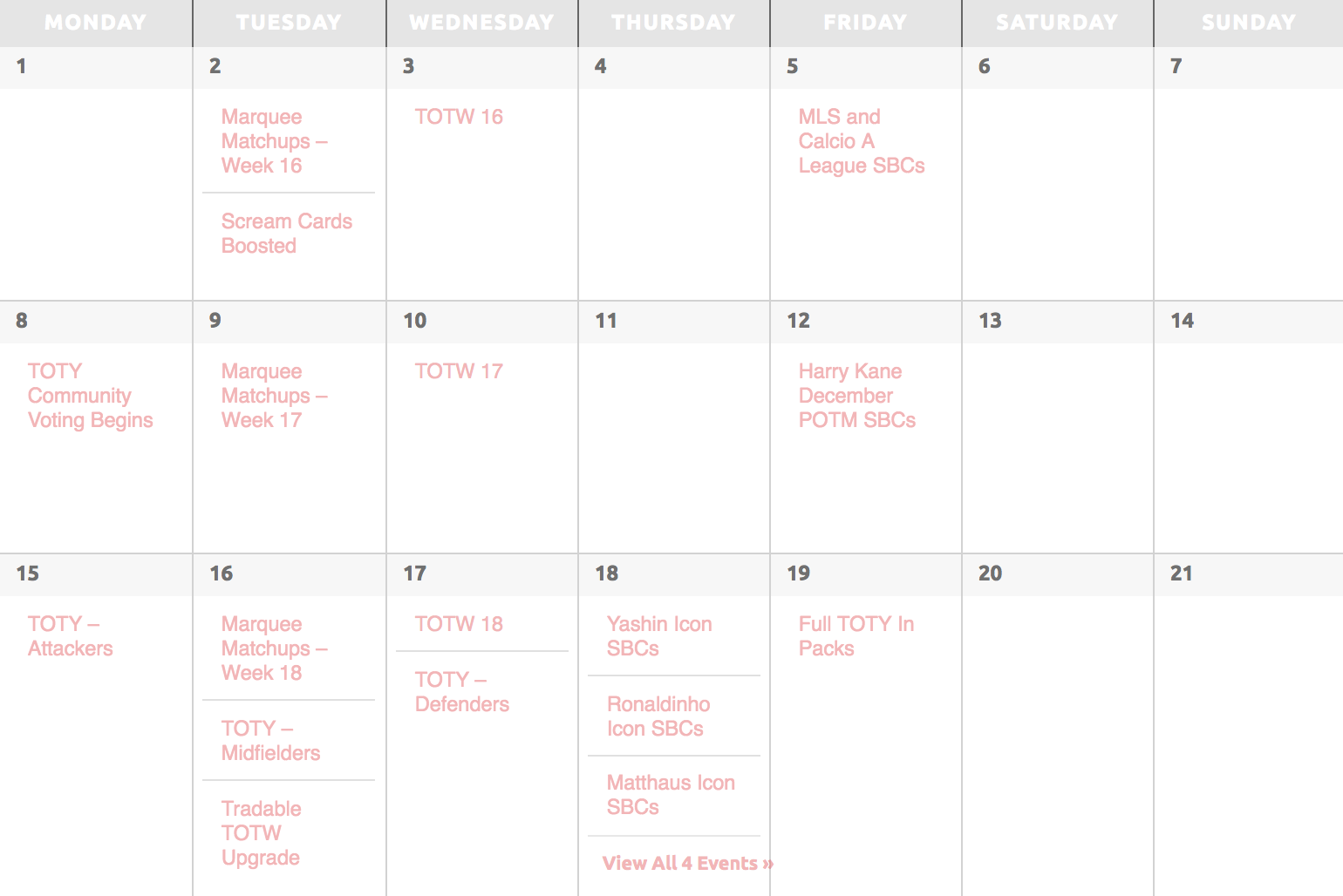 And here is how the market responded:

This year, EA will announce the winners of the TOTY voting on Monday, January 7th. Like last year, I anticipate them to release attackers the first day, followed by midfielders on Tuesday, and defenders on Wednesday. Then, the full team will be released on Friday.

My suggestion? Sell your teams this weekend (Friday/Saturday) before the TOTY release on Monday.

Do I think there will be a massive drop? No. But I think it will be substantial enough to deem selling your squad this weekend worth it, particularly for cards that are in packs.

During Team of the Year

What you can also notice from last year’s calendar is a tradeable TOTW SBC that came out on Tuesday, January 16th:

There are two things that I think are worthwhile purchases in preparation for this:

** Don’t be in a hurry to buy these players. There will be continued supply over the next several days, not to mention A LOT of supply if TOTY attackers are released on Monday.

Hey chief, you recommending ANY 83s? Or specific positions make more sense? Thanks, as always!!!

Anything at 1k is good. If you are targeting certain positions, Glik and Savic are decent for CBs.

Appreciate it. Not really targeting any particular position. This whole scene is new to me. I’ve noticed that GK don’t seem to go as high, so just wasn’t sure if I should be focusing on defenders, mids, attackers?? I’m happy to take your advice and load up on 83s. Thanks again.

You have to consider whether the extra coins you pay for a defender is worth the potential ROI they could offer. Sometimes it’s worth it, sometimes it’s not.

Ok, last one. Two questions… First, I can’t find a single 83 for 1k or less…just be patient and persistent? Can GK work for this strategy or do you prefer field players?

Yes, try bidding/sniping during times where there are lots of packs being opened.

Should i sell my gold Mbappe?

Hi chef Would UCL CR7 will drop more during TOTY? Considering no inform cr7 at this moment, the normal cr7 also out of pack.

Considering the TOTY Ronaldo will overtake him as the best Ronaldo in the game, yes, I think he will go down.

Hi chef, how do u think selling prime Eusebio gold CR7 and totgs Neymar? Will that be enough for TOTY CR7 and Messi?

yo Chief i got inform Pogba, inform Salah, otw Felipe Anderson, UCL Live Davinson Sanchez, UCL Live aurier, SIF van Dijk and Inform Fabinho. When should i sell? or should i keep them ?

It depends on your desire to use the players or potentially save coins by selling in case of a market dip this weekend. It’s your call.

I’ve seen youtubers speculate in UCL Live cards not dropping much value due to them being out of packs and CL getting closer and closer. What do you reckon?

Yes, they may hold their value more than others.

About a week after the nominees are released. I’m expecting those to come this weekend.

Got any sniping filters

I reserve trading information for my Patreons.

Chief should i sell ramos, kante and suarez?

The TOTY will be REVEALED on January 7. That doesnt mean that they already in packs right? If so then will the informs that you listed not have a lot of supply

Correct, the dates I listed above are predictions. Nothing is for sure.

Chief, should I sell 97 Maradona and 90 Ronaldo or they won’t be affected?

Yes, I would sell. Last year they dipped during TOTY.

What should I do with my Alissons?

Yes, they are a decent look.

Hi chief, do you think the price of icon players will up again ? thank you

is it really likely to have another TOTW SBC? we just had one, is it worth it investing again?

All we can go off of is what has happened historically. Last year they had one for both FUTMAS and TOTY. That is why I think they might have one again.

I’ve only got 2 gold cards in my squad (De gea, Kante), the rest being IF: Mbappe, Alex Sandro, Pogba and VVD with prime Blanc, Nedved and Gullit. Walker and rui costa untradeable.

Even with the amount of packs being opened, do you think it will actually meaningfully impact the supply of icons at all? Should I only sell De gea and Kante? A little unsure because the tax on Gullit alone is 300k.

You’ll find similar graphs with other cards as well.

I understand that this year could be different, but it’s better to base our decisions off of what has happened historically than pure speculation.

Chief, should I sell prime klose? I’d be down over 200k after tax as he is running for 1.1 at the moment. Will he continue to fall during and after toty, or will his price come back up after toty?

Hey Chief, what about IFs that are out of packs? For example Robertson’s 84 IF LB or VVD’s 86 or 87 IF? Would those be safe to keep due to limited supply? I would rate Robertson as a safer hold due to his lack of upgrades but would it be better to sell and buy back VVD due to his likely TOTY?

I still think it’s safer to sell than to hold.

I would sell in the hype before the Bundesliga POTM. Wait until the nominees are released and sell shortly after the voting ends.

thanks chief! is it possible he will get up to around 25k…. hes already 21500 without any hype just out of packs. also when does voting start and when does it end? thank you.

Thanks chief! Sorry but again you say voting starts this weekend and if it does when will the voting end and will he be released Soon after? And also you are sure his highest price will be before voting ends? Thanks

His price will be go up if it’s required. It will go down if he is not. That gamble is up to you, but historically selling in the hype is the right option.

thanks chief so the max hype will probably be not this friday but the next one just around 1 day before he is released right? thanks again

thanks chief! but do you think theres any possible chance that there will just be a locked squad with a german informed required? thanks again.

Yes, of course there is a chance. No one can know what EA will do for SBC requirements, though.

Chief seeing how inflated the players prices have been this FIFA, if Ramos gets a TOTY do you think his card will cost above 2million?

He will probably be right around that price.

Should I sell my TOTW 15 investments before TOTY?

If it’s the German informs, I would sell in the hype before the POTM. Sell the others when you are happy with the profit.

what about infrom mbappe? if he gets toty would his price not rise

when does potm salah drop?