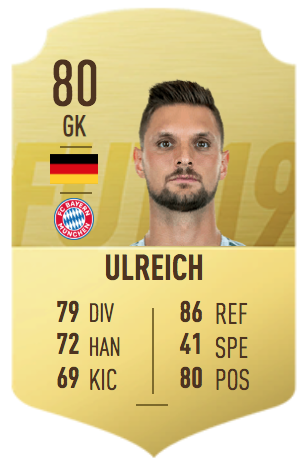 Reasoning: Some of my favorite investments are those that cover a lot of bases; there are a number of SBCs could hit that would make Ulreich rise coming up, including:

I likely won’t release another player for Bundesliga POTM.

I bought jovic , leno, sule, mandy if, etc. and they didn’t rise. this time I won’t follow you. i will wait for the end of this event.

Correct – Jovic was the wrong choice between him and Milik and the unexpected FUT Player Days promotion caused Mandi to fall.

“Didn’t rise” isn’t entirely accurate in the case of Leno and Süle, considering many people sold in the hype and made profit, or you could sell now and make profit compared to the prices I recommended them for.

Buying during the 2 for 1 promo got me plenty of Mandis for under 15k, and it’s not 18.5 – so cheers on that, Chief! Can’t complain about a modest few thousand profit per.

yes, sure, but they got stuck in my “hash”, i couldn’t sell them. anyways, no problem. don’t you think is still a bit risky to invest during this events? because prices may drop hours/days later, due to new SBC’s. cheers.

Risk is a spectrum. Sven is a low risk investment given you can get him for close to discard and there are a number of SBCs that could require him over the next 4 days.

You’ve probably held too long. I did it with some of my Leno’s. Most of Sule and Mandy I did have – sold in hype bofore POTM realease and earned quite a lot on them. Leno alone almost 1k- one card and Mandy 2/2.5k at least.

Hey man i bought milik for 2k and sold them at 2.6k. Made 42k profit at once in the hype. For Leno i bought him for 2.5k and 30 minutes aftet potm released its price goes up to 3.3k
Note: sell when you happy with tour profit. You can hold a player for bigger profit and its a risk.

i bought 15 cards of leno and i made a decent amount of profit from that, i sold it at the right time, i dont know about the others like sule or mandi , but leno was a good investment for me , if you want to play safe then invest for the players that are guarantee to be needed in the sbc like this ulreich, for players of the month to be clear GG!!

I made a profit off of all these players. Not every suggestion is going to get you back 200% profit.

Leno sold for 3,8k IF u sold at the right time.

hey chief…
how about Caldara for today Italy Carniball? for around 900 coins?

If there is an SBC that requires 2 Italians like the Belgian SBC, he will go up. No way of saying for sure, though.

Jovic could be a good investment thentoochief

Not sure of your rationale behind this.

Well he is a Bundesligaplayer too?

I suggest you reread the post and compare why Ulreich is a far better look than Jovic.

👍 Did and I still sit on some Jovics from that last investment. Hope to sell them somehow.

I’m still holding Leno and Morata. Could’ve sold Leno in the hype but didn’t, so I’m holding for a potential MM SBC for Athletico, and 84-83 Carniball SBCs for Germany and Spain. Sound like a decent idea?

What do you think of Renato Sanches for 450 in terms of MM SBC?

OK, but that would be the only SBC that would cause him to rise, unlike Ulreich who has 3.

Vargas IF is 12k right now – good investment or not?

Good idea to invest around 40K on really cheap 84’s ( Sommer for 1,2K) ? How much do you think that they are going to rise ?
Thanks for all,
From Belgium

They will rise eventually – it’s just a matter of when.

What do you think of Ji Dong Wong for the Bundesliga POTM? He is the cheapest golf Bundesliga IF by about 4k. Will his price rise at all for the POTM?

Maybe a bit, but its very likely his highest price would be in the hype before the release.

So you do think his price will rise from 10k? Im not asking how much, jus that it will rise?

Do you think sule will go over 6k? Im debating whether to sell or not without being too greedy

Eventually, yes, but I do not know when.

How much chances do you give IF Mandi to rise to 20k? Bought few for 14k and they’re going now for 18k but I feel like he could reach 20k.

He will rise gradually with time.

Out of topic but i really need someone to answer this question. I have like 300 gold players that i do not use at all in mu club but do not know what to do with them. Quick sell? SBC? Sell? Hold?

Sell. The coins are better put in investments.

Should i wait until promo ends?

The sooner you liquidate and put the coins in better investments, the better.

I know this isn’t relevant to the post, will man of the match rashfords be at its highest? Based off previous events

Chief, I packed carniball Jesus who goes for around 500k at the moment. Should I sell now or will his value rise at the end of the promo when out of packs?

He might rise a bit, but you are better off selling and investing elsewhere as you likely get a better ROI.

Do you think that Seamus Coleman is a good investment for the St. Patricks day event?

I wont be online at 7pm on Friday when they realese the potm. Soonest I’ll be available around 9m, does it wort to invest in Ulreich regarding this fact? thanks in advance

There are multiple SBCs that could require him between now and then, so I’d say yes.

Kepa for the Carniball Spain SBC releasing on Thursday I believe. POTM investment would be Sule, but you might have missed that hype train already.

This market is crazy. Tried all morning to get Sven’s under 1000k. Nationaelf SBC comes out and he’s up to 12-13k. Now’s he’s easy to get for under 1000k. Hoping Friday there’s isnt’t panic selling from all the investors.

Gomes
Reply to  Dave B.

I bought more than 50 Ulreichs and his price did not rise. I had to quick sell all of them

I bought 25 ,84 rated sommers at 1.5k hel’l surely rise at least to 3k during bundesliga potm right? Or at least enough for me to not lose coins, should I go further in or hold out

I would not say he will surely rise to 3k.