Over the past three FIFA installments, there have been drastic changes to the landscape of FUT trading and investing. Prior to FIFA 17, there were limited methods for generating coins. However, EA has made some great additions to Ultimate Team in the past few years that have allowed even the casual player to profit from the transfer market.

Ultimate Team was introduced as a game mode in 2009. From that point until FIFA 16, there were relatively few ways to make coins on the transfer market. They can be broken down into 5 methods:

1. TOTW Investing – The idea behind this strategy is based on tenants of supply and demand. Every Wednesday, a new Team of the Week (TOTW) is released based on player performances from the previous week. These upgraded cards remain in packs from Wednesday at 6PM until the following Wednesday at the same time.

Initially, player prices for these upgrades are expensive due to the lack of supply. However, as more packs are opened throughout the week, prices drop in price, often reaching their lowest levels on sometime between Sunday and Wednesday.

Then, when these players are removed from packs, they generally rise steadily in price. Timo Werner is a great example of this from FIFA 19 – he rose from 61,833 coins to 261,896 coins (PS4) in the 6 weeks following exiting packs after TOTW 1.

To be clear, not all situations are as profitable as Valencia’s was last year. However, it is a good example to show just how good of an investing strategy buying TOTW players before they exit packs can be.

A pairing strategy that coincides with TOTW Investing is the Out-of-Packs (OOP) method. For TOTW 1, when inform Werner went into packs, his base card went out of packs. This cut in supply (particularly in the early stages of the game when card volume is so low) also often causes for price increases. Gold cards also go out of packs for other special cards as well (e.g. TOTS, TOTKS, MOTM, etc.).

2. Sniping – While TOTW investing is more of a long-term strategy in the sense you hold the player for days or weeks until he rises, sniping is a bit different. With this strategy, you try to win a player through “Buy it now” by purchasing him for 10%+ less  than his regular price (smaller percentage necessary for more expensive players).

3. Bidding – Similar to the sniping strategy, bidding also requires you to buy players for 10%+ less (smaller percentage necessary for more expensive players) than their current cheapest BIN price on the market. The difference is that you bid on the player rather than buying it now.

5. Old Inform Technique – This is a strategy for later in the FIFA trading season as players begin to get multiple informs. When the new TOTW comes out, many players panic sell IF’s if the player they have gets a new one. After looking at multiple cases, usually the low point of this occurs around 2 hours following TOTW release on Twitter (1 hour before they are released in packs). For example, in the 2 hours after Martial 2IF was released, his 1IF dropped to 145,000. However, 8 hours later, it’s price is up to 175,000, and by Friday it rose to 200K+.

For this installment of Ultimate Team, EA added some features that created 4 new methods for investing.

*NOTE: ALL METHODS FROM BEFORE FIFA 17 ALSO APPLY TO FIFA 17*

1. SBCs – Similar to how the forward pass changed the game of American football, so too was FUT Trading revolutionized by one addition: the Squad Building Challenge. There are many different ways to invest for SBCs, but a few include:

2. Bronze Pack Method (BPM) – With an abundance of new SBCs, players in FIFA 17 began to have value for reasons that weren’t related directly to their usability in-game. Many bronze players who wouldn’t have sold for 200 coins previously would now be purchased for thousands of coins due to challenge requirements. For this reason, BPM became a popular coin-generating strategy in FIFA 17.

In addition to players, other consumables (squad fitness, contacts, employees, etc.) could be flipped for profit with some patience.

3. Ones to Watch (OTW) Cards – EA introduced these “live” items in FIFA 17 for the first time. As stated on EA’s website:

“The Ones to Watch items dynamically upgrade and have an opportunity to increase in ratings throughout the season. If you have a Ones to Watch item in your club, its ratings will automatically match that of the players latest Team of the Week, Man of the Match, European Team of the Tournament, Hero or Record Breaker In-Forms. The better the player performs in real life, the higher their ratings become!” 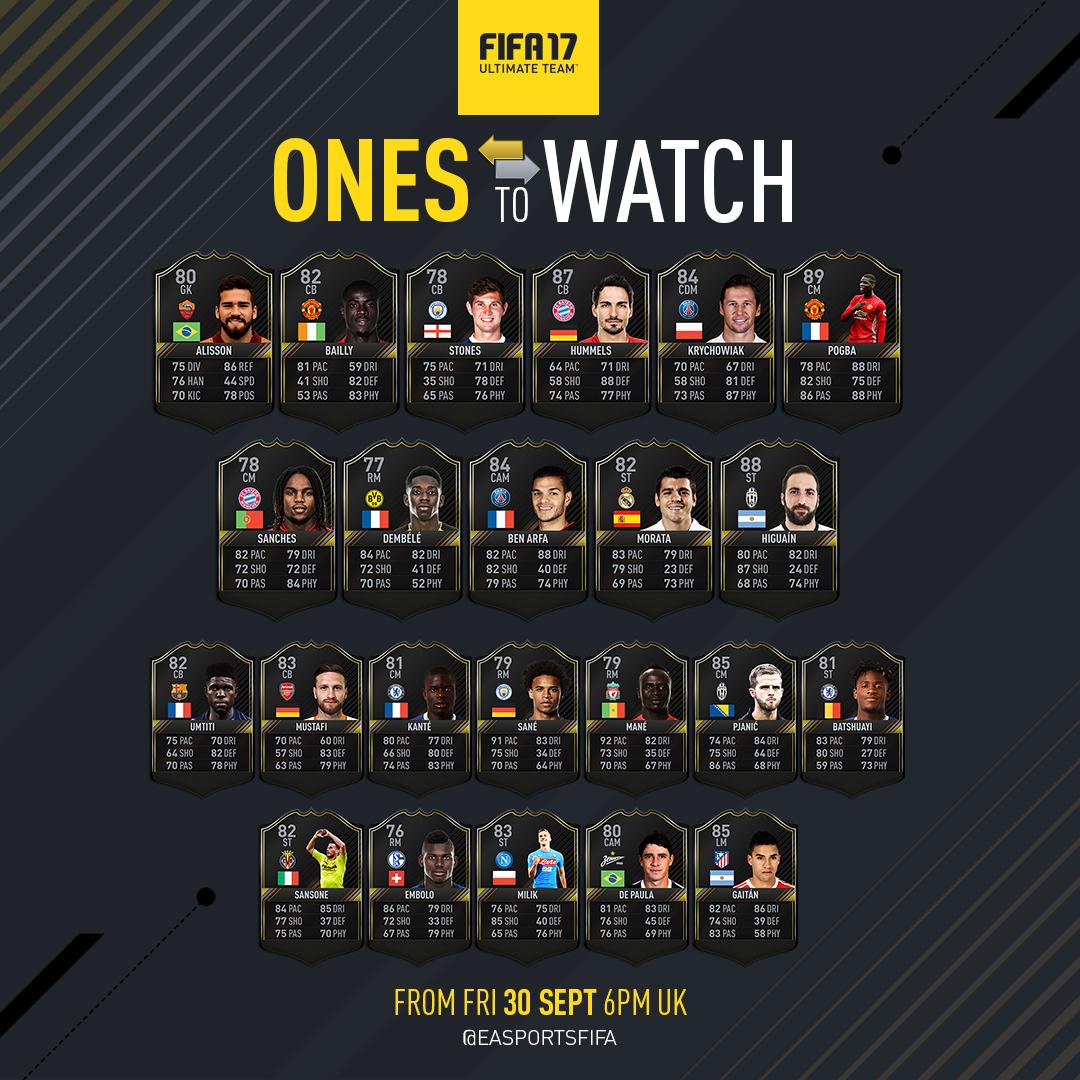 For example, if Pogba has a TOTW-worthy performance for United, you would see his price increase for the impending upgrade. Investing in these players could prove very profitable if you get them before their match.

4. Weekend League Investing – The grueling 40-game Weekend League format began in FIFA 17 (changed to 30 game in FIFA 19). This feature created consistent market schedule in which player prices were often the highest on Fridays (when people were buying their WL teams) and lowest on Sundays (when people were selling their WL teams). To invest, simply buy commonly used and overpowered players on Sunday and sell back on Friday.

A big part of this game was centered around the fact that it coincided with the World Cup. We had 2 new strategies stemming from FIFA 18.

1. Path to Glory (PTG) Cards – Like Ones to Watch, Path to Glory cards are also live items that were added in FIFA 18. These cards (of players who hoped to earn a spot on their national team’s World Cup roster) would get an upgrade equal to that of their TOTW, MOTM, TOTT, Record Breaker or Hero cards.

2. Selling in the Hype – With so many new methods for making coins, TONS of new players took their shot at trading and investing this year. As a result, selling in the hype was often the best option for the most profitable returns.

For example, Harry Kane was the favorite to win the September POTM in FIFA 18. Many people thought that one of the SBCs would require his gold card (as it did for Mane’s August POTM SBC). As a result, he became extinct. However, when the POTM SBCs dropped on October 13th, he was not required, and his price fell drastically. In that situation, you would have been better off selling in the hype than holding until the SBCs dropped.

Gaining rights to leagues and tournaments is a prerequisite to EA being able to release much of their content. New licenses for FIFA 19 brought about 2 new investing strategies.

The first of these UEFA Marquee Matchups was released on Tuesday, October 2nd for Group Stage Matchday 2.

These SBCs often had highly desirable rewards and stingy challenge requirements, so those players that were required shot up in price. It will be interesting to see if EA continues this for FIFA 20 – the first would likely be released on Tuesday, October 1st.

2. Bundesliga POTM – For FIFA 17 and FIFA 18, there was only a POTM for the Premier League. In FIFA 19, the Bundesliga was added to the mix, typically released the 2nd or 3rd Friday of each month (the Friday after the BPL POTM was released).

I’d expect the BuLi POTM to continue in FIFA 20; in fact, I think it’s likely we see an additional POTM from another top league as well (La Liga, Ligue 1, or Serie A).