Welcome to my new series of Squad Reviews. I decided to try something else, just to see how it would turn out and if you guys would like it. The idea is that I’ll play with a specifically themed squad each week. I won’t review the squad as a whole, but I will focus on each player individually, giving them a quick walk-through covering their pros and cons. One player in particular will get a featured review as you guys are used to. Each squad is formed by a set of rules as I don’t want to spend a fortune each week. Also, there is no use in me including SBC players which aren’t available anymore. For the first week I decided to go with the nation of France, mainly thanks to you guys voting on Ribéry to be reviewed. As expected, he will be this week’s feature player.

I decided to try this as last week’s Weekend League offered some of the worst gameplay I have ever encountered. It frustrated me so much that I went searching for a different game to entertain me. After quickly becoming bored with the free Sonic game, I went back to FIFA and came up with this idea. I had loads of time to play on Thursday, and luckily the gameplay had improved by then. This was when I could really take advantage of the 5* skillers France provided me. 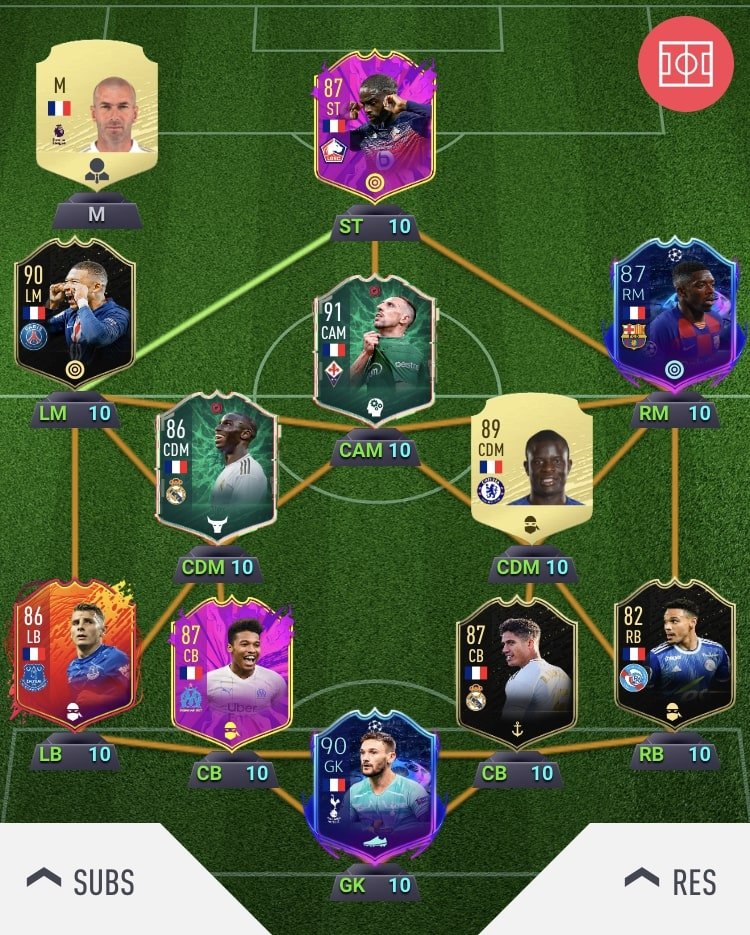 In game I swapped Ikoné and Mbappé, but other than that each player didn’t move around the team much. Ribéry moved to ST in 442(2), but the rest stayed close to the positions shown. I would’ve liked to play 41212(2) as well, but I didn’t really have a player that could play CM to my liking.

This was the one I expected the most from, as he rips me apart every Weekend League. I can happily say that he did the same to a lot of my opponents, scoring goals I didn’t expect to go in. His 5* skills really suit my playstyle and his 4* WF feels like a 5* when he is on fire. Add his strength and you can see why Mbappé is feared by most FIFA players. Even when the gameplay was holding me and the rest of the team back, Mbappé was unaffected and continued to score.

This was the man you voted for and he will get a featured review to be released in the next couple of days. Keep an eye on my twitter and the Futchief website for it’s release. I will post a link to his review here when he is published.

While this card typically tears me apart, sadly it didn’t perform as well for me as he does for my opponents. I had a lot of trouble getting this card to work for me, especially his first touch as it was one of the worst I have experienced. Each time I thought I had him in the clear he’d mess up the touch and let the defender catch up with him. I don’t know what it was, but it got really frustrating. At first I blamed the gameplay, but even with Thursday’s improved gameplay he was still a disappointment. His pace was one of his biggest pros though – he felt much faster than his stats suggest. When he did manage to make a proper touch, his 99 agility was really noticable and he managed to turn before you could blink.

This is a card I have been meaning to try for so long, but never got around to. I used his gold at the start of the game (like 99% of the community) and I loved him. Thankfully Dembélé didn’t let me down like Ribéry and Ikoné. His 5* skills and 5* WF were and he was blistering fast. Dembele was by far the most fun player in the team and I found myself looking for him time and time again. I constantly dribbled when I should have passed, but I didn’t care as I was enjoying myself. He scored a lot more than Ribéry and Ikoné and was one of the better players on the team.

The most popular LB of the game has yet another special card, and I’m sure we will be seeing another version soon. While his Futmas card was my LB for multiple weeks, I wasn’t overly excited when I saw this card. I knew he had great box-to-box potential, but I was bored by him. However, when I realized how limited the French selection of box-to-box midfielders is I decided to give him a chance. I was pleasantly surprised. The flaws I found in his Futmas card were much less prominent. He was a much smoother dribbler, even though he only got a +1. Defending was another flaw of his 85, but I really noticed the +4 he received on his ShapeShifter card. He was well suited fot the role of box-to-box well with his pace, physical presence and 4* skills and 5* WF. I went with the Powerhouse chemistry style, because he does need a significant passing boost to play on the midfield.

The tiny man from Chelsea has a huge presence on the pitch. He is veryfast and so agile. Kanteis always in the right place when you need him and he is extremely difficult to pass. I absolutely love his ferociousness, apparent in every aspect of his game. He is one of the best tacklers I have used both this year and last. With the shadow chemistry everything except standing tackle and heading accuracy are maxed out. His standing tackle is “only 96” and his heading accuracy is something we don’t talk about; you don’t buy Kanté expecting proper headers from him. My major problem with Kanté last year was his passing, and while his stats haven’t changed much, he feels much more secure this year. I hadn’t used him in a while and it was an absolute revelation to use him again.

I used Digne’s IF when it came out and I was really impressed, so when I needed to pick a LB for the team I didn’t think twice and went with the Evertonian. From the start he was the stronghold in my defense. If only he had a better a better player in front of him his passing abilities would’ve had much more of a chance to shine. His through balls along the line were always spot on and time and time again launched Ikoné in behind, only to have him mess up the first touch and lose the ball. With the shadow chemistry applied he has really impressive pace and more than decent defensive stats. From all my defenders this was the one that I liked the most.

This was nother card that I wanted to try from the moment I saw him. Sadly he kind of got lost most of the time and he didn’t really standout. Not in a good way, but not in a bad way either. His pace is more than enough and his other stats are great, but somehow he didn’t feel that great. He is a really solid defender and his dribbling stats really help him move around, but other options in his price range were much better for me. However, I am not saying he is bad and I hardly ever caught him making a mistake (unlike a certain Real Madrid defender I will cover next). If I were ever to build a French or Ligue 1 team again I’d 100% put him in my team, unless we get some new spectacular cards.

After reviewing his Headliner card a while back I didn’t think I was going to revisit Varane ever again, but somehow I wanted to give him another chance. This was a mistake – he cost me at least 5 matches via a direct mistake by him. Sometimes he had a poor touch on a 5m pass, and there were moments when he was incapable of turning faster than a truck. His passing is absolutely subpar and feels more like 40 than 65, and his pace is a bigger lie than 16 year old me telling my mom I didn’t scratch the car. Do. Not. Buy. This. Card.

The lack of good, tradeable French RB’s is shocking, but fear not – if you missed Lala’s Moments card there is an alternative. This 82 rated RB was the biggest surprise of this team. I only put him in there because I saw no alternative except someone on 7 chem, but I didn’t want to do that. Instead, I decided to go with the popular FIFA 19 fullback, and I’m glad I did. His pace is great and so is his defending. I was constantly afraid that he’d lose against the big cards like Neymar, Mbappé and CR7, but he held his own time and time again. He played no different than his Moments card, which I find absurd. Perhaps I was just lucky, but I really enjoyed this card.

Personally, I don’t really believe there is a huge difference in keepers. I think it is a very personal choice as to which goalkeeper you’re using. I know a lot of people don’t like Lloris, but for me he has been really solid. I have used both his gold and RTTF cards and neither let me down any more than other keepers.

This was a really fun first team to use, but sadly I couldn’t enjoy it more because of the poor gameplay. This was a fun way for me to review a lot of players that I would normally skip. It was a really balanced team with good players in almost all positions. I still can’t get over the fact how good that Lala’s inform was – simply  amazing.

I really hope you guys like this form of review, and please let me know if you want to see more,

I was really surprised that you didn’t like Varane. I use the same card as you reviewed but in red, along with VVD in central defence, and he always out glance VVD. He always feels fast and often catches up to the defender. But I usually play with a high defensive line, so he has often time to catch up to the attacker. Did you play with a high line of defence or did you use the “drop-back tactic”?

I don’t play drop back, but I play at around 3-5 depth depending on the situation. Varane just never seemed to click for me somehow.

love the concept, so many player reviews… love it!