Inform fodder from TOTW 9 performed very well this week after going out of packs. I expect more of the same for TOTW 10 fodder. The following are my favorite looks with buy prices:

Look to buy during TOTGS pack openings this weekend. List for lazies and look to sell after rewards next Thursday, December 10th. A profit of 2-3k would be solid.

Should I sell romagnali or hold till Tuesday?

I would sell. I don’t think he will go up much more from what he is now from Beckham.

I would sell. I think TOTW 10 Fodder is a better look for investment, and I don’t think he will rise much while OOP.

Why is De Bruyne’s price going down?

Many cards have decreased, out of packs players included. He will likely dip more as the weekend progresses.

I would sell ASAP. He will likely fall more with supply.

I think they will decrease after this weekend league. I’d look to sell ASAP.

He will continue to go down until TOTY. Sundays/Mondays will be relative low points for him, though.

Nice! He is a safe look considering he discards at 10k.

Hey chief !
What is the reason of Ruben Aguilar(IF) investing?Well,the other 82s IFis not mucher than him !THX 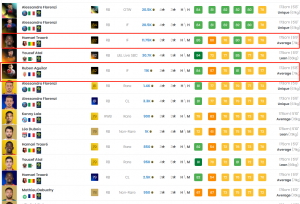 Aguilar is French – easier to link

He has a good position, league, and nation. Mario Rui also did well as an 82 rated fullback after going out of packs.

Bought a couple IF Raphinas at 110K – should I sell at 70-75K and cut my losses or do you think he will rebound?

Also, do you think high tier metas like neymar and mbappe will rebound?

I think both Raphina and high tier metas will continue to go down through the weekend.

Hi Chief, I Bought couple of Dembele smth like 40, should I sell him now with lost od 3k per 1 card or wait and maybe he will go up

I think he will continue to go down. I would sell.

I think I missed the buy windows on these guys, I have around a mil liquid, what do you recommend in the mean time until Thursday flips?

On PC by the way

These informs are the safest thing to have your coins in. You should still be able to snipe them for good prices. Look to buy during SB rewards and other pack openings.

Nice one! Yeah I looked at his price earlier today and noticed that, too.

Could see the same rise due to the lack of French RBs. If you didn’t do Sambia or Mukiele then he’s the only RB to link Alessandrini

Sorry I’m new to this website and trading stuff, so if we invest in these players, how many of these should we look to buy and when should we sell?

The buy prices and sell times are listed in the article. You can buy as many as you are comfortable with. They are relatively safe investments considering they are the cheapest informs for their respective ratings.

When would be a good time to buy varane?

He will continue to decrease with time and have weekly lows on Sunday/Monday going forward.

Hello chief, these prices are quite high now. Only weghorst is +1k pacheco and fabian rose quite a bit. Not a good idea to invest in pach and fab with current prices right?

You should be able to get prices on some for close to my buy prices during SB rewards. Aguilar is particularly safe given he discards for ~ 10k.

What do you think of that special card yazici as an investment the Europa league one.

I am watching him, but I don’t think he will go up while he is in packs. He would be a buy for later in the week.

When do they go out of packs?

I believe they are in packs until Friday.

The recommended sell time/price is typically listed at the bottom of the post. You can always refer to that.