While I am not bothering with Icon Swaps at all, I still know that a lot of you are doing them. So I thought I’d help out. My first potential swap review will be base Zambrotta. I used this card before and was a fan, but this time I’ll use him with the review in mind. Paying more attention to details and what I find important in his position. So that I can paint the best picture for you guys, regarding his strengths and weaknesses. I was planning to use him for a bit longer, but changes needed to be made and sadly he had to go.

I used Zambrotta on what  normally would be Atal’s position, so RM and RWB. I also think he would make an amazing CDM, but I just didn’t felt the need to try him out there. While I did notice I wasn’t using Atal, it didn’t affect my team at all. He was more than capable of covering the right side of the field by himself. 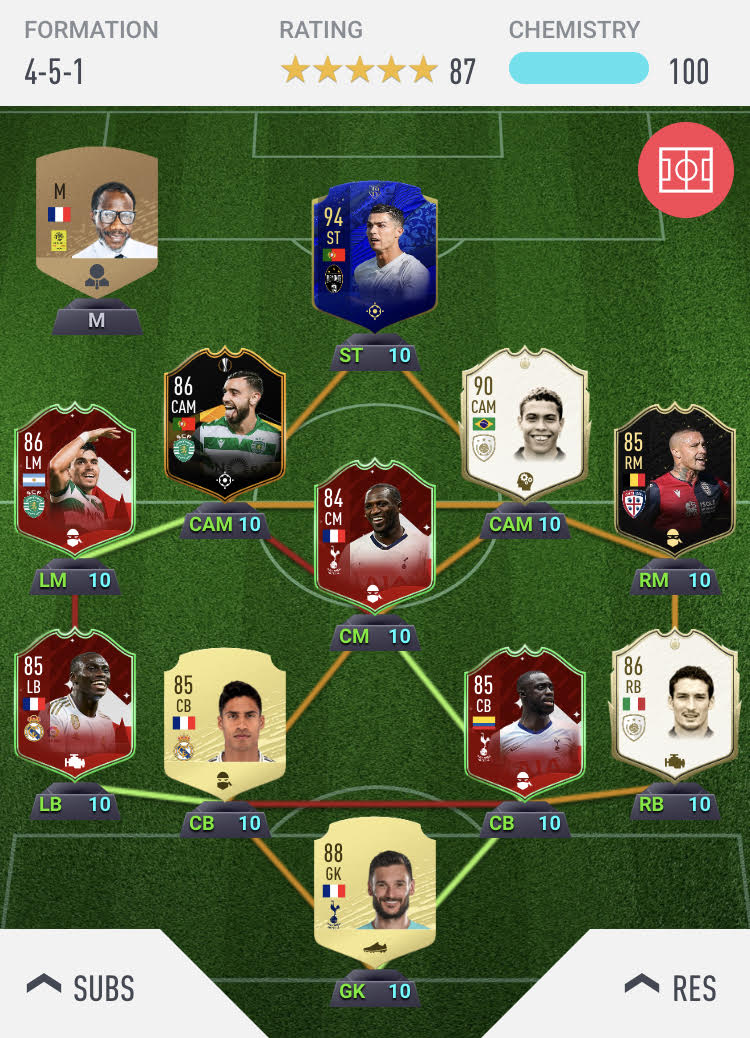 So yeah, what can I say about his shooting? I would avoid it personally. He didn’t come in a position to shoot that often, but when he did it was often dissapointing. The one goal he scored was tap in from a low cross. When I played the short corner and he was on top of the box I tried some shots. However without much succes. I quickly learned to avoid to shoot with him and look for the pass. This turned out the be the best choice. With the Engine chem style applied, he really has some decent passing stats and he almost always finds a teammate. I was never afraid to use him to deliver an offensive pass or include him in my build up play.

This catagory was quite improved by the Engine chem style, which was also the reason why I opted for that particular chem style. 91 base pace isn’t slow, but I like to have a lot of pace down the wings. So the +5 from the Engine card was more than welcome. It turned out to be more than enough to be able to get away from fast wingbacks, with a little help from his physique, but I’ll get back to that. His dribbling was the main reason I went with Engine. the +5 agility and +10 balance really helped out and I found myself enjoying some tricks to cut inside or get around the outside. Of course it’s not high quality stuff, but it gets the job done.

On to one of the most important features of a defender. Due to my choice with Engine these stats were left unaltered and gave me a really good view of what he is capable of as a defender. And I must say that I honestly think he’ll make a really good CB aswell. He has the physical prowess to fulfill that role, as well as the defensive capabilities. His tackles are spot on and he is able to use his body while defending. When you apply the Sentinel chem style he even gets to a 91 rated CB. Which could open the door to some interesting position changes in game. All in all I was really impressed with his defending and physique.

All of this comes together in the excellent rating of a 8.5. He does everything he has to do, but not really that something extra. I really enjoyed using him regardless. He is what I am looking for in a RM/RWB and if I ever find myself in a position that I can’t use Atal for what ever reason. I’ll surely get back to Italian.

I sniped him for 480k when he was 510k and sold him for 600k, so I was pretty stoked on that obviously. Do I think he is worth 500-600k? Yes, considering the lack of similar cards and the fact that it is an Icon really does it for me. But to answer the question if you should get him for your swaps? It depends if you did Atal or not and if you can always link Atal in. I think Atal is the best RB/RWB/RM in the game right now, but Zambrotta is a close second. So no Atal? Do Zambrotta.

I hope everyone finds this useful in their swap decisions. Till next time,

I think I’m gonna take Zambrotta in these swaps so thanks for the review, sounds good

Glad I could help 🙂