Once again, I have completed an SBC to inform you whether or not it is worth doing (and totally not because of my raging, uncontrollable SBC addiction). Moments Hazard spoke to me in a way no SBC has spoken to me since last years Icon SBCs. This was what I had been missing all these months – a challenge with expensive and elaborate SBC’s. I was more than happy to complete him, and because of my pack addiction I had plenty of fodder to help me do so.

This is a card that gives me mixed feelings, and from what I’ve read elsewhere I am not alone. It’s not just Hazard’s Moments card, but also his other cards. He feels a bit bland, and while he does his job, he isn’t anything special. I can’t find many flaws with him either, but he is lacking that “wow” factor. I mainly did this SBC because I felt that he would be of good use later on when I needed a winger to link up with certain other players. This resulted in him being used in a variety of different squads and, until recently, not a proper amount of games in a row.

This is the team I am currently using him in and, unlike previous squads, I don’t rely on him here. This is my “main team” at the moment and I will work on this until I’m finished with this FIFA. He and Ronaldinho cover the wings while Cruijff and Ronaldo terrorize the center. 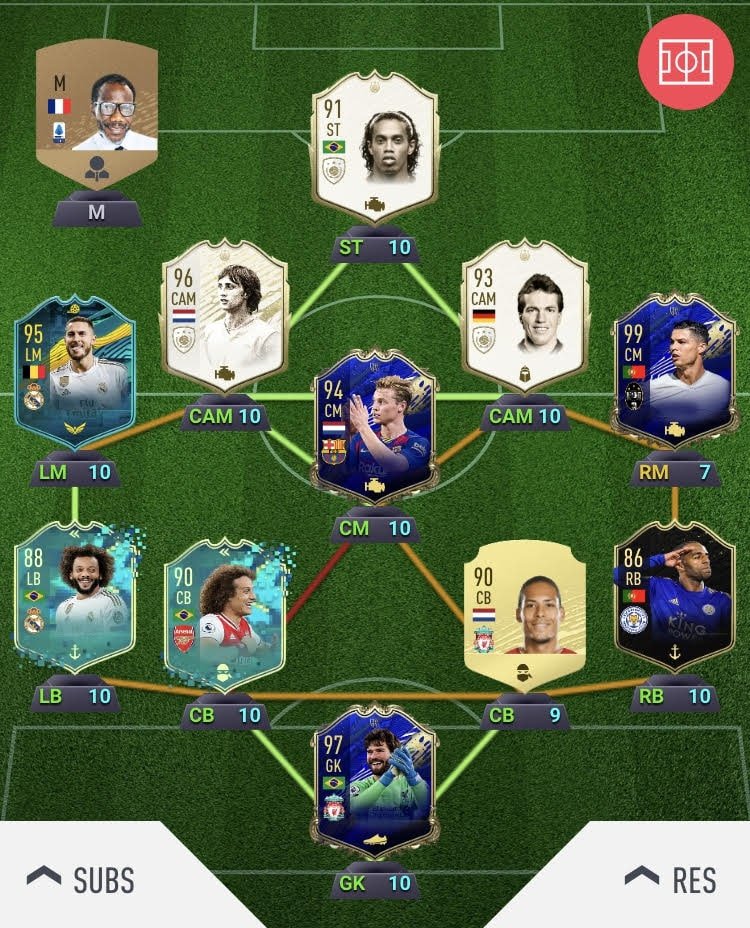 20 goals is nothing spectacular, but that is mainly due to the fact that he spends most his time on the wings. I am having real trouble getting goals out of my wingers, and most of his goals also came from the period in which I was playing him as my CAM. However, when he gets in front of goal I am confident – he always manages to produce a solid shot at goal. What I really notice, though, is that when he has a good chance, he’ll finish it, but he can never turns that half chance into a goal like so many other top tier cards can do.

His passing is absolutely flawless. As long as I don’t pick a wrong target to pass to, it will arrive. It is really nice to have a winger that is this reliable in the build up play. His weak foot feels like a 4*, but at least a really solid 4*. I can’t recall many occasions in which his WF let me down.

Again, nothing special here. Where you’d expect him to be lightning fast, he is only really fast. I use him with the Hawk chemistry style, and I must say I was constantly expecting more. Sure, he is fast enough to get away from defenders, or get in position for the tap in after a rapid counter, but it never felt that fast.

His dribbling is the only category in which he really shines. 97 base Dribbling is no lie, giving him a feeling that of Messi on the left. He turns defenders inside out and is responsible for many broken ankles. If only he had 5* skill moves, then his dribbling would be perfect. He is able to keep the ball so close to him, while still moving at pace. While I don’t typically perform La Croquetta, I frequently use it with him. He easily glides in between defenders where you’d think there is no space.

I love his stamina. He always has energy for one last back tracking run, or that final counter in extra time. It might be his insane balance, but he feels so strong on the ball, holding off defenders 10 times his size. No need to try jumping with him, though. I can’t remember him winning any aerial duel. His defending is not what you should get him for and I can’t say that I have used him that much defensively.

A really good card, who will be a great addition to any team. However, don’t expect him to be your main man, unless you play him as CAM. I’m really happy I completed him, though, because I’ll always have one of the best LW’s in the game. However, if you’re looking for that special card to lead your team to victory, I’d go with someone else.

He currently sits at 1.4m and that’s a lot, considering Neymar’s base card is a little under 800k. I managed to complete his SBC for around Neymar’s price, and I feel that’s a good value. If you have some fodder laying around and can fit him in, go for it

Thank you and good luck with rewards tomorrow,