Today we’re doing something a bit different. I’ll be reviewing Atal’s ShapeShifter card, but he is such a versitale card that we’re going to split the review in smaller bits, each covering one of the positions I played him in. I’ve played him in each position at least 10 matches to get a good understanding of his capabilities. I could have tried him in many more positions, but I didn’t have had that much time.

The benefit of my current team is that I have a lot of versatile players, so I can easily play him wherever I want. I started off with him as my CAM behind Cruijff, moving Gullit to CDM. Then I played him as my ST with Cruijff behind him, followed by a box-to-box CDM with Gullit at CAM and finally at RB with TAA as box-to-box CDM. I applied a different chemistry style for each position, as I did not want to play him as ST with Guardian. 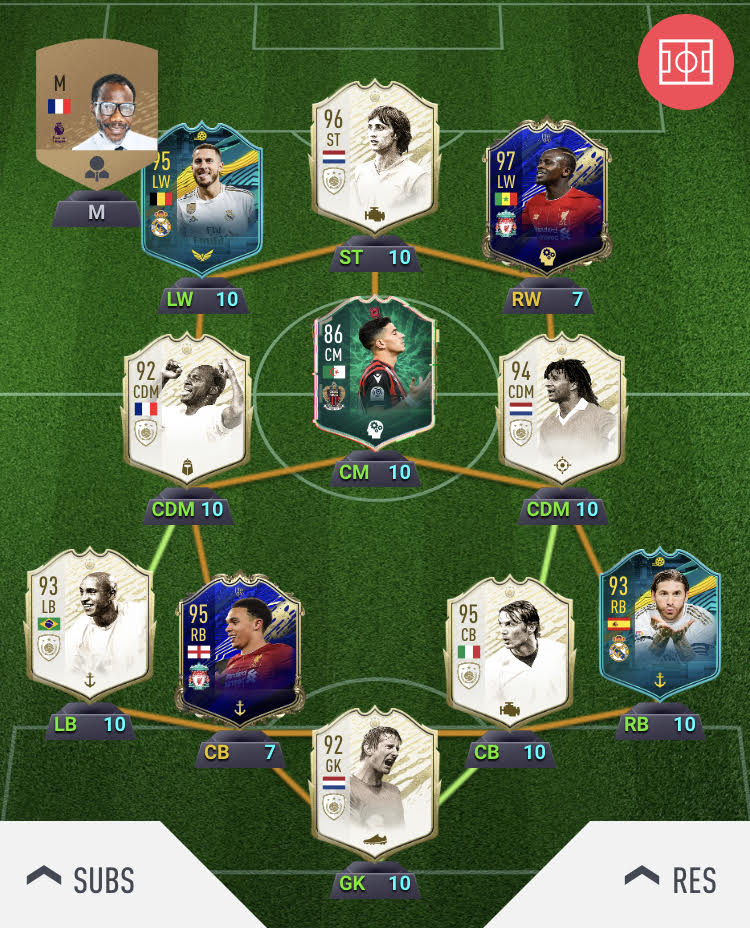 Currently my team is perfectly set up for me to try loads of different players thanks to my icons giving me options with chemistry. TAA switches to RB and Ramos to CB. Vieira is my “stay back while attacking” CDM and Gullit or Atal play as the box-to-box CDM. I feel like Mané TOTY is the best RCAM/RM for me, even at 7 chemistry. I’ve thought about TOTY Messi, but I never got him to work for me on the outside.

This was fun. He’s lightning quick, he’s got the skill moves and he has that sweet 5* WF. He’s like the Algerian Eusebio. He has scored some absolute bangers for me from outside the box, but he also always was in the right place at the right time to score the tap-ins. This is obviously thanks to his insane Positioning (99) and Finishing (99). His tally isn’t that spectacular, but he scored only once from CDM and not at all from RB so that ups his ratio a bit. All in all he was fun to use as a striker, but I won’t recommend using him there. He is much better in a position where his defensive abilities can shine.

His 4* skills and 5* WF give him a great basis to work from as a CAM. Add his great shooting, passing and dribbling and you have a great CAM. His speed meant he was a real threat when I went for the one-two with Cruijff and he could dash in behind. The Maestro chemistry boosted his Long Shots (87) by 10, but it felt like it was maxed out. He almost always found the target from outside the box. One of his problems was his low Vision (85) and I found him failing to find his teammates from time to time. His Stamina (89) was more than enough for him to last the entire match, eventhough I played him on “come back on defense”

This is nother role he can fulfill with ease. His defensive abilities outshine his stats. With the Backbone chemistry applied his Defending (84) is really decent, but in reality it is nothing short of amazing. He moves so quickly and is so easy to position. His Interceptions (82) feel closer to 90 and his Standing- (89) and Sliding Tackles (89) are closer to 99 in reality. I’m so impressed by this little man and everything he does. His Passing (90) again is pretty decent, but like I said, his vision holds him back. His Short Passing (96) is great and he was the link up I needed between defense and attack. He receives the ball out the back, turns before you register it and delivers a pass to my attacking players with ease.

This might be his best position. Just like his Futmas card he is made for flying up and down the wing. His Pace (95) feels like it’s maxed out and he gets away so easily when he goes up the pitch. When he gets near the opposition’s box just whip in a cross, because his Crossing (98) is unreal. So far he hasn’t missed a target yet. When he is tracking back, he is so quick to catch up with the winger. His Defending (87) with Guardian is even more solid compared to the Backbone chemistry. He is so hard to pass and when you do he is so hard to get rid off. What Guardian also does is give him +5 Composure (88), which I think he does need. Especially when dribbling I with the ball he choked under pressure quite easily. I found him stronger on the ball with Guardian than with Maestro or Marksman applied.

This was a fun card to use in every position, but there is side note that I’d like to add: this isn’t a card that will change games for you, that will keep you in the game or put you ahead when you’re struggling. He performs well when you are better than your opponent or when EA has your back. As soon as you’re being outclassed or when the gameplay is holding you back, he gets a bit overwhelmed. Besides that he is well rounded and his incredible speed is really something no matter where you use him. I’m happy I had the chance to use this card, but he is hard to link. Also his Futmas card was just as good or perhaps even better as RB for me so I doubt I’ll use him again.

He is around 500k right now and unless you’re looking for a super pacy Ligue 1 box-to-box midfielder, I feel there are better options out there. In every position I tried him in there are better cards to be found for less. I know some pace lovers are going to disagree with me and that’s fine. I’m not saying he is a bad card, but he should cost less in my opinion.

All in all he was great fun to use and I hope anyone who does decide to get him feels the same way,

What about atal at RAM? I have ikone playing there, I want to replace him with atal. Should I do it?