Out of all the players I used this weekend, Moments Ramos surprised me the most. I had recently incorporated his inform into my team and was loving him. Upon returning from the movie theatre on Saturday, I was ecstatic to see his newly released RB card, and had my girlfriend not gotten upset with me I would have completed on the spot. Even on CB at 7 chemistry he is still an amazing CB with crazy pace.

As I mentioned, I was already rocking Ramos’ IF before this came out. His IF had such a huge impact on my team that I couldn’t wait to try his Moments. I wondered how to place him in my team, though. I first tried Kanté CB and PIM Zanetti to switch with, but Kanté and Vieira together in midfield was lacking some creativity. I decided to go with with TAA on 7 chem and I simply switched him and Ramos. I must say I haven’t felt any difference between 7 and 10 chem for TAA. 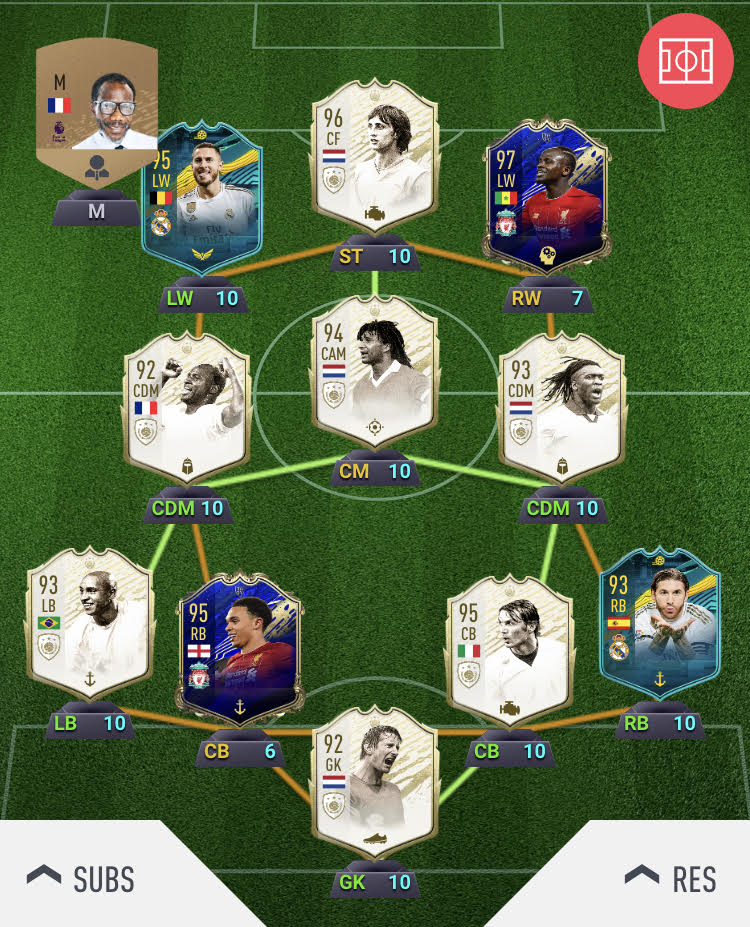 This is the team I finished the WL with. It pretty much plays as shown, except TAA and Ramos obviously switch positions. Also, I use 4231 in game, but visualizing that shouldn’t be a problem. In 41212(2) Mané and Cruijff are my strikers with Hazard behind them on CAM. Seedorf and Gullit are my Dutch CM power couple and Vieira is the beast in the back.

Similar to Kimmich, I won’t be rating his Shooting (83) as all his goals came from Penalties – which shouldn’t be a surprise if you consider how insane his Penalties stats (99) are. His Passing (80) is nothing spectacular, his Short- (85) and Long Passing (88) are solid, but the rest is mediocre. Fortunately, this never gave me any trouble in game as I rarely use my CB’s for any complicated passes. However, with pass boosting chemistry styles he looks like a really solid CDM. I’m sure I will use him there at some point as I always like using Kanté, and he wasn’t the greatest passer either.

Does his Pace (94) live up to the hype? Yes. It does and more – he is ridiculously fast. As I was accustomed to his IF there were times where I thought I was caught in behind. But there he was, saving the day with nothing but raw pace and pure awesomeness. Sometimes when my opponent leaves a gap, I make a run for it and he is hard to catch when he gets going.

His Dribbling (83) looks a bit underwhelming, but when you take a closer look you see that the important stats are really high and the average is just kept down by his Balance (74) and Dribbling (72). His Agility (87) is really great for a CB, and he moves smoothly with and without the ball. His best stats are his Reactions (97) and Composure (94) which give him a lot of security. I can always rely on him to keep me in the game. Also, his 3* skills mean that you can do Zidane spins around attackers, something I particularly enjoy.

I was close to giving him a 10/10 for both of these categories. He is extremely strong and fierce. His Strength (93) even feels low – I can’t recall him ever being outmuscled. His Aggression (99) helps a lot with his aerial prowess and shoulder-to-shoulder battles. I have been lucky so far as hasn’t caused any penalties, but I’m sure they’ll come including a red card. I mean, it’s Ramos, of course he’ll get a bunch of red cards. His aerial prowess is perhaps one of his best abilities. He jumps so high and is so strong in the air, and I don’t think he has lost an aerial duel yet.

His Defending (98) is insane, he is absolutely one of the best defenders I have used this year. He hardly ever misses a tackle, except of course when EA needs your opponent to score, but we’ll leave that out of the review. He is just an impenetrable wall, like Gandalf shouting: YOU SHALL NOT PASS!!! You simply can’t get around him. His Heading Accuracy (99) will undoubtedly result in a few headed goals eventually, but I haven’t had the pleasure yet.

This might be the best SBC EA has released all year. I am madly in love with this card. I’m currently playing him on full chem, but I am sure he’ll be just as good on 7 chem. He can do so much more than just defend. He can dribble the ball, give a good pass and he can jump over the goal keeper if he wanted.

This SBC only costs 500k… Just to put that in perspective, David Luiz’ Flashback SBC would have set you back 600k. And let me tell you, Sergio Ramos is much better than Luiz. Even at 7 chem he is still far more superior to Luiz. If you need a CB and you can fit him in, whether it is at 7 or 10 chem, just complete it and thank me later.

Thanks again for reading, please let me know whether or not you’re completing him,