Shapeshifter’s is here, and this new promo has brought us some very interesting cards. I really like the idea, but I can see why a lot of people are frustrated by it. Half of the cards have had an SBC or Objective version released relatively recently. I too am a victim of this as I have completed SBC’s for Luiz, Yedder, Marcelo, Atal and Renato Sanchez. But on the bright side, I got one of my favorite cards from last year back: Midfielder Marcelo. Last year he was a RM, and I moved him to CM or CDM. Now that Shapeshifters has switched his position to CAM, it is even easier to incorporate him into my squads.

I finally had enough time for a full Weekend League and I couldn’t wait to try him out, so I dropped 1.8m (RIP) to use him last weekend. While it was one of my worst WL performances ever, Marcelo constantly found ways to make me smile both offensively and defensively. His scoop turns on the midfield were lovely, and his turning abilities were legendary. I haven’t enjoyed a box-to-box midfielder this much since I had Gullit in my old team back in November. 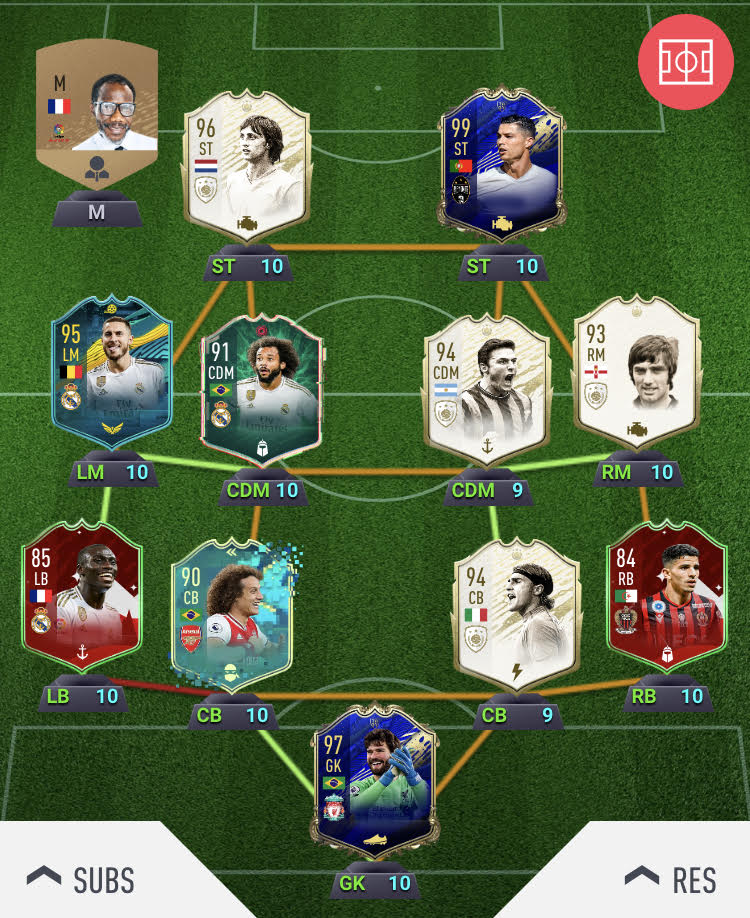 Last year he was one of my top scoring midfielders, but that was mainly due to me playing 433(5). Now, he was playing a bit further back so he didn’t get into shooting positions that often. From the 4 goals he scored I was really impressed by his Positioning (96) – they were all the result of him popping up in exactly the right place at the right time to finish it off. His Shot Power (95) means that every shot he takes is a rocket. Besides that, his stats are good enough to leave unaltered as a CDM, but when I him in a 433(5) later this week I’ll give him a Shooting boost.

His Passing is all you need from a CDM. He has decent Long Passing (85) and really good Short Passing (94). He and Zanetti were perfect for distributing the ball out of the defense and into the offense. When I had the opposing box surrounded Marcelo was always there to get the ball out of the corner to switch the side of play.

His Pace (90) feels a bit too low relative to how he feels in game. The Brazilian always found space to dash into on the midfield, and no one who could catch him when he did. His Acceleration (91) in particular felt lower than deserved as he was gone in the blink of an eye. I can’t wait to try him out with a Pace boosting chemistry style as he will prove even quicker.

Now to my favorite category of this amazingly versatile card: his dribbling. I used him with the Guardian chemistry style, and this resulted in one of the most fun box-to-box midfielder I have ever used. This man’s turning is simply unreal. His scoop turns were by far my favorite skill move this weekend and I couldn’t get enough of them. I have never had a defensive player move this smoothly. When someone did a dragback, Marcelo was already waiting for him to finish it before you even registered the dragback happening. The weekend was plagued with Delay, but this doesn’t matter when you’re using Marcelo. He responded faster than anyone else.

His Aggression (88) could be a bit higher, but his other Physical (86) felt fine. Obviously I would rather see them all 99, but we have to stay realistic. His Stamina (86) only caused me problems at the end of extra time. He easily played the full 90 minutes without the need of a sub.

His base Defending (80) is a tad low, but if you’re good at manually defending this is your man. You’re always able to keep him in position thanks to his amazing dribbling. However, if you’re playing him as a CDM, or even as a box-to-box, you should apply some sort of defensive chemistry style. With Guardian applied his Interceptions (94) are incredible and his Sliding Tackles (99) are amazing.

This is one of the most versatile cards ever released, and with the right chemistry style he can play pretty much everywhere. I can’t wait to run him and Firmino Scream in a 433(5) as my CM’s. A whopping 9.7 rating seems a bit out of place if you take a look at his other ratings individually, but this card shouldn’t be rated on individual stats, but as a whole. I am deeply in love with him and I don’t ever want to sell him.

I’m a bit biased perhaps here since I paid 1.8m, but seeing how Firmino Scream has been steady at 800-1m since he was released, I’d say Marcelo is worth his current 1.4m any day. Firmino is amazing, but Marcelo is much better.

I hope everyone enjoyed reading this and had a better Weekend League than me,