The ShapeShifters Promo is giving us loads and loads of new squad building opportunities. Moments Kimmich, for example, made it possible for me to play TAA TOTY at CDM, without sacrificing my RB position with an inferior card. Kimmich became even more attractive with the release of the Ramos SBC. All you need to do now is get one of the CDM’s with a CB position, like Base Matthäus, any Koeman or one of the many SS CB’s like Kanté and Zakaria, and switch them all in game. I’ll be going for the Kimmich-Ramos-Kanté combination next week. However I’m already reviewing Kimmich for you guys since we are, once again, unable to play Weekend League. Thankfully I have already played 20 matches with Kimmich, which I deem the ideal minimum for a review.

Like I said I would be using Kimmich as my RB. With the Shadow chemistry applied he turns into a 93 rated RB and that is pretty damn good. I found myself enjoying his build-up abilities the most, and he hasn’t let me down defensively either. Considering his overall rating, he was technically the “worst” card in the team below, but he never felt that way in game. Luckily for me this team didn’t have a noticeable weak link. 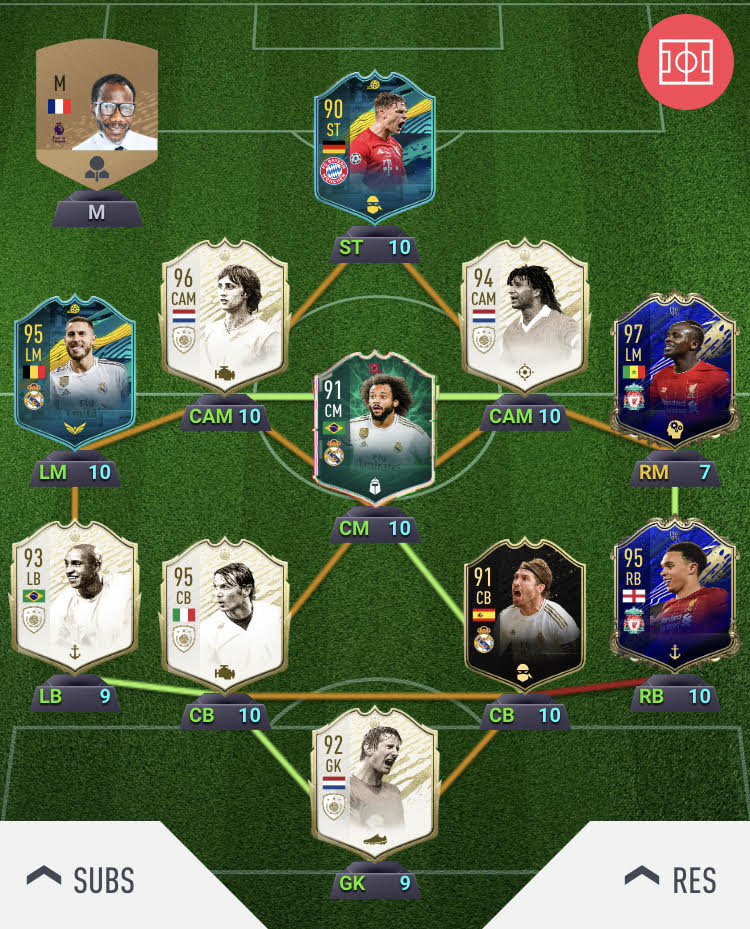 As you can see I’m not going for the experimental teams in Weekend League, but instead for pure class. Kimmich moves to RB so that TAA can play the role of the stay back CDM. Mané brings everything I want from a winger, even at 7 chem, and Cruijff is the absolute goalgetter (although Gullit is a close 2nd).

Shooting (80): N/A. I haven’t fired a single shot with him so I am not going to rate this stat. It looks okay, but I have no in game experience to reflect on. What I can reflect on is his Passing (91), and this is everything you want from a RB. The amount of times he launches Mané in behind with a perfectly placed through ball was lost on me. It is the perfect combination on the wing. Besides his through balls he has another speciality: Crossing (96). Sadly I haven’t scored directly from one yet, but they have created a lot of chances for me since he always seems to find Gullit’s magnificent dreads. His Vision (88), Short- (92) and Long Passing (88) all contribute to him being one of the best passers in my team. This was certainly aided by his 4* WF.

A lot of people want heaps of pace on the wing, but Kimmich’s Pace (91) with Shadow rarely let me down. I’m sure this is thanks to his insane Acceleration (99). He really hits his top Sprintspeed (85) almost instantly, which makes defending so much easier. His Dribbling (89) is exactly how it looks: above average, but nothing special. He moves really well while holding L2+R2 and his 3* skill moves allow him to use ball rolls. His Balance (89) helps when shielding the ball and his Agility (89) is high enough for quick turns. His other stats are all around the 90 mark and he performs really well.

His Strength (69) is his biggest weakness really, but luckily he has proper balance which helps compensate his poor Strength. This doesn’t help versus the stronger opponents, but he holds his own against most wingers. The rest of his Physical (82) stats are better. His Jumping (83) is decent, but his Stamina (98) and Aggression (90) are amazing stats. He doesn’t get tired and he is always fighting for the ball and never gives up.

His Defending (92) feels much better. He makes many impressive tackles when I think he had already lost the fight. One of the things I am struggling a lot with recently is my defensive width. It’s either too narrow, which results in through balls from the outside, or  too wide, which results in gaps in the middle. I would rather have my opponents go around the outside, so that’s why I opted with a width of 4. However with Kimmich this isn’t a problem anymore. He intercepts so many of these outside through balls. I really noticed this the first match I tried him; he somehow was always there where I need him.

This a great card at great value. He is an amazing passer, really solid defensively and has insane acceleration. He has everything you need from a box-to-box CDM or from a RB. He is such a complete card that you could even play him CAM with the right chemistry style. So are you considering doing Ramos? This is certainly a card that can help the Spaniard get to the CB position on full chem.

200k for a card like this seems cheap to me, specially if you have some fodder left or are a Bayern fan. You really get value for your coins and if you have any use for him, I would complete him!

Hopefully you guys find this useful as you’re making your last minute decisions whether or not to complete him,