Today we’re looking at a card that found it’s way into my team after I got a good deal on him, and I decided to try him out before taking the profit. In the end he stayed with me for a few weeks until I sold him to make room for PIM Cruijff. In this time I really found myself liking him more and more as I tried him in just about any offensive position. Pelé was a great addition to each team I tried him in and it was a sad day to let him go.

I’m not one to judge whether Pelé is the best of all time. Unfortunately, I was never able to see him play, but what I can say is that in FIFA he is impressive. His Pace, Dribbling and Shooting capabilities were incredible. Last year I claimed 91 Cruijff was better, but this year there is no chance. I tried both for 100 games or more and Pelé beats my favorite of all time by a mile.

This is the team which I used him the most. He played RM in 442 or RCAM in 4231 so that Messi could play ST or CAM. Pelé produced an amazing goal/assists record that few cards have beaten. To this day he is still the best RM I used in 442. 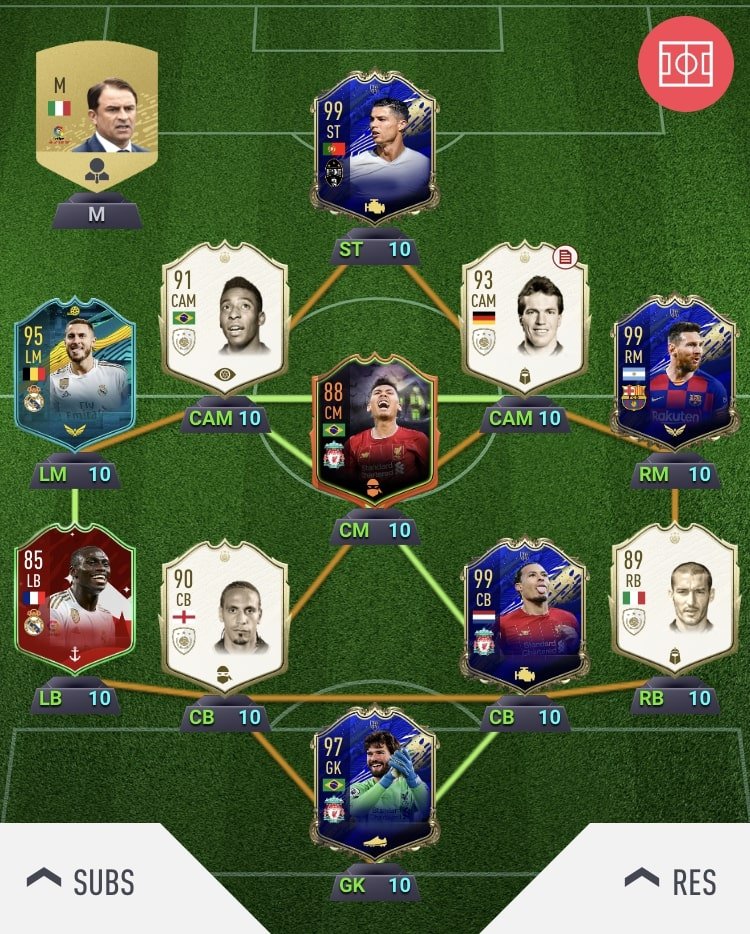 103 Goals in 121 matches is insane. To keep scoring this many goals while changing positions, suffering from poor gameplay and playing in different teams is incredible. I played him with the Deadeye Chemistry Style and it boosted his shooting (96) to an impressive level. It didn’t matter if it was close or long range, he got it on target. He hardly ever let me down with his Finishing (99), even when the gameplay was at its worst. His Positioning (99) was perhaps his best feature, though. He was always in the right place at the right time.

His 76 assists already says a lot about his Passing (94), but not everything. His Vision (99) and Short Passing (99) are the main reason behind all his assists. He never failed to reach CR7 when he was making a run, or Messi with a cutback in a crowded box. While I’m writing this I’m actually starting to wonder why he didn’t get more assists. Perhaps I’m nostalgic given the fact that I haven’t used him since PIM release. All in all he was amazing for me at CAM and his 4* WF felt more like a 4.5* than a 4* which certainly helped with these two stats.

My god this card is fast – his Pace (94) down the wing is unreal. Not even gold Semedo could catch him. Combine this with his amazing Dribbling (93) and you have the perfect balance between pace and skill. His dribbling is what enables this card to be so effective on all other attributes. He is always able to make space for the shot or the pass and always finds space to run into with his tight twists and turns. I think his Dribbling stats should be at least 95 to reflect how they feel in game. He is not the best dribbler I’ve used, but top 10 easy.

He has decent Physical (73) stats considering he is a fast and technical card. His Jumping (88) and Strength (72) are great as a winger. He won’t get pushed around that easily and he can be helpful in the air. Besides that his Stamina (88) makes him last all game. You don’t buy this cards for his Defending (53) so we can leave that at N/A, although his Heading (83) is really solid.

Taking everyone else’s opinion into consideration, this is the second best base Icon in the game behind Eusebio (haven’t tried him yet). He is certainly the best base Icon I used. My only problem with him though is that I have no real life affiliation with him, unlike Cruijff or Gullit (as they’re Dutch) or like my childhood heroes: Ronaldinho and Zidane. However, after using him I do have an in game affiliation for him and I really want him back.

Worth every penny. Although I didn’t pay anywhere near his current price tag I would still pay the full 2.7m if I could fit him in my team right now. In the 2.5-3m price range we find Shapeshifter Messi, 93 Mbappé and Base Cruijff and I think he’s better than all those cards. Perhaps Messi is better as ST, but it won’t be a big difference. Pelé would still be better everywhere else in my opinion.

Thanks for reading and please watch the video I posted below,