Time for another Swaps review, this time we’re looking at my childhood hero: Ronaldinho. He is available in this batch of swaps and judging on the comments on his futbin page, loads of people are grinding for him, just because he is their favorite player.I can understand this 100%! So for those of you who are interested, you probably want to know if he is useable, and so I am reviewing him to hopefully make your decision easier.

I was pretty excited to review him as, like I said, he is my childhood hero. I’d watch hours and hours of Ronaldinho skills compilations on youtube and I have used him every FIFA. Last year I did his Prime SBC and I am looking forward to trying out his OP card this year. We’re starting however with his Base card and it has some interesting looks. 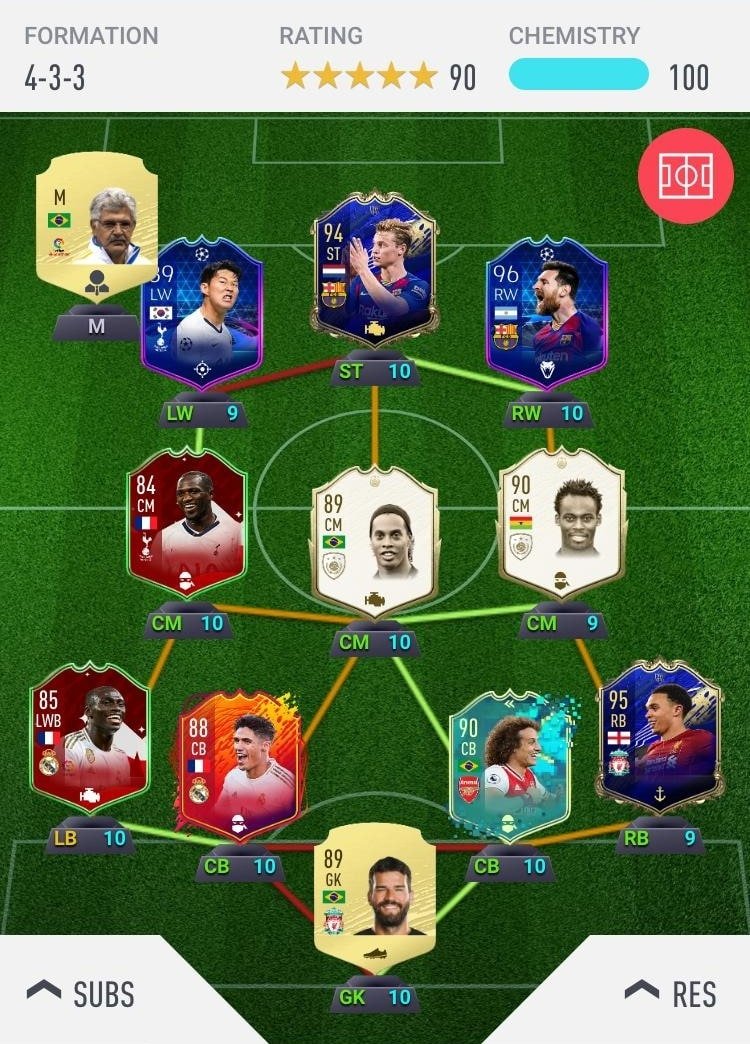 I wasn’t expecting much from his shooting as it was left unaffected by my decision to go with the Engine chem, but it didn’t matter much. He scored some worldies for me (as you can see in the video at the end). What I really noticed were his runs in behind from the CAM position. I can’t recall any other CAM making these kind of runs this often and this well. It really created space either for him or for my two strikers. He rarely let me down with his finishing, but I doubt he is going to be your top goal scorer. His passing did get a nice boost from the Engine chem and it was really top notch. He pulled of some amazing assists and was just an awesome launchpad for Messi and Son. The little triangles down the middle with those three were great fun and probably frustrating to a lot of opponents.

Pace is really what this card lacks. I can only imagine how his mid or prime will play like. If they make the same runs as this one, but with the added pace… Mamma Mia! Even with the +5 pace from the chemistry style he just isn’t quite there. I mean it is enough for any other CAM in my opinion, but with Dinho’s forward runs I wished he had a little more. His dribbling however was my favorite part. I might be biased here, but there is nothing better than to watch Ronaldinho skilling around. His elastico’s and scissors are the smoothest out there and to watch those beautiful black curls twirl after him is just pure joy. He really has that special something when it comes to dribbling and time and time again I found myself going for the skills instead of just passing around. Of course the added Agility and Balance from the Engine chem style were really nice and perhaps necessary, but I reckon he’d still be fun without those.

His physicality has two very different sides. On the one hand he has 82 Strength and that is really helpful while dribbling and on the other hand we have perhaps the biggest flaw of this card: his stamina. He won’t last more than 70 minutes as a CAM and you will need another good CAM to sub on. Which is really a shame, because you want to use this card for the full 90 or 120 minutes. His strength helped me a couple of times taking the ball while tracking back and was really noticable when he was shoulder to shoulder with a defender.

All things considered I am only giving him an 8.9. If his stamina was any better he’d be a lot higher, but it just was such a huge flaw. He is a great card, solid shooting, good passing, great dribbling and amazing runs forward. He is such a good and fun CAM to use, but his stamina kills it for me. But if you have a good sub, don’t mind only using him 70 minutes and just love the guy. Go for him, grind all the swaps and play with this amazing player.

1.2m he cost me and I don’t think he is worth this price. I think there are similar cards out there with better stamina. You’re paying 1.2m for only 70th minutes, so you have to pay for the remaining minutes with another card. Which is just a waste of coins in my opinion.

I really hope you guys find this useful and please let me know if you’re going to choose him,